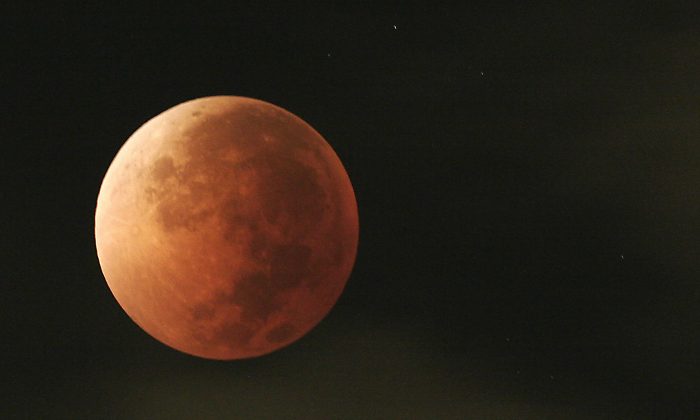 The moon is seen taking different orange tones during a lunar eclipse over Mexico City, Tuesday, Aug. 28, 2007. The event was widely visible from the United States and Canada as well as South America, the Pacific Ocean, western Asia and Australia. During a total lunar eclipse, the moon's disk can take on a colorful appearance from bright orange to blood red to dark brown and, rarely, very dark gray. (AP Photo Marco Ugarte)
Science

With increasing interest in space, people are wondering what a blood moon is and whether any will happen in 2014 or 2015–and the connection between blood moons and the lunar eclipse tetrad.

Let’s check out what we know about blood moons.

The term”Blood Moon” isn’t typically identified as an official astronomical term, although NASA references how the full moon or total lunar eclipse in October is called the “Blood Moon” or the “Hunter’s Moon.”

The name comes from hunters who tracked and killed their prey by autumn moonlight, stockpiling food for the winter ahead. “You can picture them: silent figures padding through the forest, the moon overhead, pale as a corpse, its cold light betraying the creatures of the wood,” according to NASA.

This is also the first full moon after the Harvest Moon.

What Turns the Eclipsed Moon Red?

Earth casts a long shadow, which starts on the ground. When you step outside at night you’re in it. The shadow stretches almost a million miles into space, far enough to reach the moon.

“Suppose you had a personal spaceship,” says NASA. “Here’s your mission: Tonight, at midnight, blast off and fly down the middle of Earth’s shadow. Keep going until you’re about 200,000 miles above Earth, almost to the moon. Now turn around and look down. The view from your cockpit window is Earth’s nightside, the dark half of our planet opposite the sun. But it’s not completely dark! All around Earth’s limb, the atmosphere glows red.

“What you’re seeing is every sunrise and sunset on Earth–all at once. This ring of light shines into Earth’s shadow, breaking the utter darkness you might expect to find there. Turn off the cockpit lights. There’s a lovely red glow.”

A series of four consecutive total lunar eclipses is known as a tetrad.

The next tetrad is slated to start on April 15, 2014. The second blood moon is supposed to happen on October 8, while the other two are set to take place in 2015 on April 4 and September 28.

Some people, such as John Hagee, pastor of a church and author of “Four Blood Moons: Something is About to Change,” say that the tetrad holds religious significance, particularly because the first two blood moons align with the Passover and the Feast of Tabernacle. Hagee told Fox News that the tetrad signals the end of the modern era.

“Technically, the end times began with the outpouring of Pentecost 2,000 years ago,” said Hagee. “We have been in the end times a long time.”

Hagee is credited for popularizing using the term Blood Moon to refer to the full moons in the lunar tetrad.

NASA explains that Italian astronomer Giovanni Schiaparelli first pointed out that the frequency of tetrads varies over time. For instance, there were no tetrads from 1582 to 1908, but from 1909 to 2156 there are 17.

The Royal Astronomical Society of Canada says that after the upcoming tetrad, the next one will take place in 2032 and 2033. The one after that is slated for 2043 and 2044.

All told, there are slated to be six tetrads through 2091, not including the upcoming tetrad.