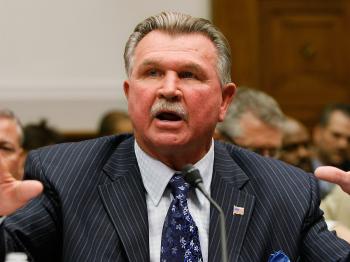 As the weather turns brisk and glides in to the holiday season, Americans are once again devoutly observing the autumn ritual of football. Imagine that while watching your favorite team this Sunday, you could see into the future of those talented NFL players. If you could, it might just look like the new documentary Blood Equity.

“To feel like I’ve been exiled,” says ex-NFL-player Toby Wright about his experience with the Players Union. “What have I done?” he asks.

Rico McClinton and Roman Phifer, training partners, partnered up to produce Blood Equity, a film that exposes the often heartbreaking plight of retired NFL players. Their intention is for wrongs to be made right.

Suffering greatly from injuries incurred during the physically taxing game, the film alleges that the Players Union has refused health care to its retired players. It claims that the league often lies about the severity of an injury during a season and denies that the injury was sustained during a game. These claims are portrayed through personal testimonies of players and their loved ones who witnessed first hand the deterioration and suffering of a father, husband, or a friend.

The film exposes the greed and selfishness that has undermined the true spirit of the game.

I spoke with McClinton outside of a Santa Monica café, just a few blocks from the infamous Venice Gold’s gym where he and Phifer trained. The robust and endearing former body builder turned actor jokes that Phifer, a 15-year NFL veteran and 3 time Super Bowl Champion, abandoned him for a position as assistant linebacker coach for the Denver Broncos—as he tells me about how this project came to be.

Phifer, after attending a retired-players meeting in Florida (eager to see old friends) heard things he hadn’t heard during the 15 years that he played—information about retired players, which troubled him. He soon approached McClinton, and they were on an unexpected journey in a world new to them both. Because of their passion and commitment to telling this story right, they enlisted veteran producer William J. MacDonald, who recently won four Emmys for mega-epic series Rome .

“Everyone we contacted said ‘yes, yes, yes’,” explained McClinton—regarding the initial process of getting people involved and setting up interviews. “Everyone feels that something should be done.”

Included in the film’s line up are football legends Mike Ditka, Harry Carson, Willie Wood, Cyril Smith, Donnie Green, Tony Dorsett, Darryl Johnston, and Michael Felix. Hall of Famers and lesser-known players alike, share heartfelt and personal testimonies of how living their dreams as NFL players has turned their lives into a nightmare.

“If they do this to a legend, imagine what they do to guys we don’t know,” assesses McClinton.

“John Mackey can’t remember his wedding day…he was a superstar,” says McClinton—recounting the scene where his wife Sylvia shows him pictures of his children that he can’t recognize.

“I watched these guys when I was a kid,” McClinton says of the many Hall of Famers in this situation. “It’s not about them, they are fighting for other people.”

Especially vocal on this subject is Hall of Famer legend Mike Ditka. “Mike Ditka is doing well, but he is looking out for other people. When he spoke, I had chills,” says McClinton of Ditka who delivers a powerful message. [He is] “so passionate and convicting, he meant what he said, it’s not about him, but other people.”

As Ditka points out in the film, there is plenty of money to do the right thing, but greed is getting in the way.

“It’s getting out of balance with the whole country,” says McClinton, on consumerism and greed.

“People get greedy,” laments McClinton “You can only spend so much money. You can always reach back and help somebody. When is it going to stop?”

Blood Equity was released on DVD on December 1 and can be found at Amazon, Borders, and Netflix.