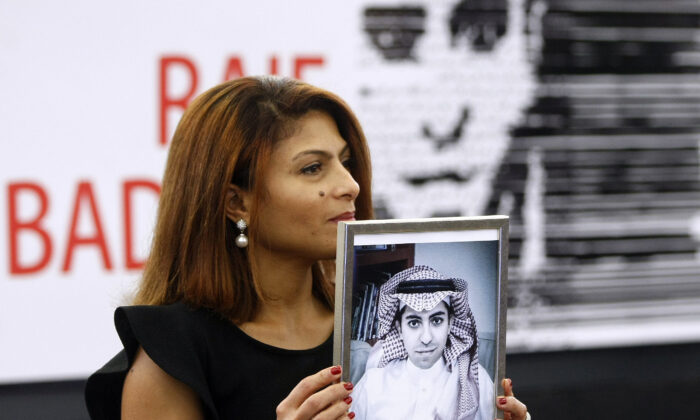 Ensaf Haidar, wife of the jailed Saudi Arabian blogger Raif Badawi, shows a portrait of her husband as he is awarded the Sakharov Prize, in Strasbourg, France, on Dec, 16, 2015. (AP Photo/Christian Lutz, File)
Canada

Blogger Raif Badawi Freed After 10 Years in a Saudi Prison

After spending the past decade imprisoned in Saudi Arabia, blogger and activist Raif Badawi was freed Friday.

Badawi’s wife, Ensaf Haidar, who lives with the couple’s three children in Sherbrooke, Que., confirmed his release on social media.

A spokesperson for the family said it had no other comment and that it isn’t clear what sentence conditions remain for him.

His sentence drew widespread international condemnation, and numerous organizations, governments, and advocacy groups have called for his release over the years.

Montreal-based human rights lawyer Irwin Cotler, who represented Badawi internationally since 2014, said last month that discussions between the European Union and Saudi representatives gave rise to hopes that the blogger would be released sometime in March.

Cotler, Canada’s former federal justice minister and founder of the Raoul Wallenberg Centre for Human Rights, also warned that while his prison sentence was at an end, Badawi still faced a 10-year travel ban, a media ban, and a punitive fine that was handed down at the time of sentencing.

“We’re talking about a kind of prison without walls where he’s deprived of travel for the next 10 years,” Cotler said at the time. “That would be continuing the punishment outside of prison that he was having inside prison—the severe pain of being deprived of being with his wife and children.”

Last year, both the House of Commons and Senate voted in favour of a motion calling on the immigration minister to use his discretionary powers to grant Badawi Canadian citizenship, but that hasn’t happened yet.

Badawi’s family and supporters had been calling for his release since his sentence expired on Feb. 28.

Rebecca Vincent, director of operations and campaigns for Reporters Without Borders (RSF), said on social media that she felt “overwhelmed with relief” at his release, despite that he should never have been imprisoned in the first place.

Overwhelmed with relief that @raif_badawi is finally free after 10 long years that he never should have spent in prison. We never forgot him. We never stopped campaigning to #FreeRaif and we’ll keep at it until he’s safely out of Saudi Arabia and reunited with his family abroad! pic.twitter.com/5bgne1fiRy

The RSF, an international NGO that focuses on safeguarding the right to freedom of information, said in a news release on March 9 that a charge of “insulting Islam,” which Badawi received on appeal in 2014, is “arbitrary” and is now illegal even under Saudi law.

“Raif Badawi’s continued detention is outrageous, after a 10-year sentence that he never should have been forced to serve,” RSF Secretary-General Christophe Deloire said.

“In keeping him detained now, the Saudi authorities are adding to their long list of crimes against press freedom. Enough is enough – public debates are not crimes, and journalism is not a crime. Badawi must be released without further delay!”

The group also noted that Saudi Arabia ranked 170 out of 180 countries in its 2021 World Press Freedom.