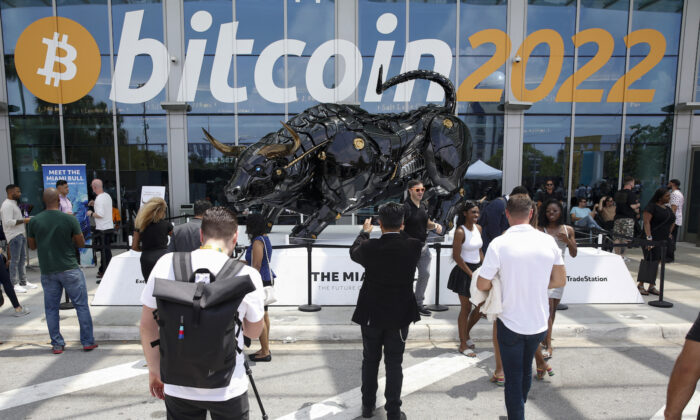 Attendees pose for photos in front of The Miami Bull during the Bitcoin 2022 Conference at Miami Beach Convention Center on April 7, 2022. (Marco Bello/Getty Images)
Cryptocurrency

A report commissioned by the Pentagon’s Defense Advanced Research Projects Agency (DARPA) has found that blockchain—the technology behind cryptocurrencies like bitcoin—is not as decentralized as commonly thought, while also being vulnerable to attacks.

“The challenge with using a blockchain is that one has to either (a) accept its immutability and trust that its programmers did not introduce a bug, or (b) permit upgradeable contracts or off-chain code that share the same trust issues as a centralized approach,” according to the report (pdf) published in June.

Every widely used blockchain has a “privileged set of entities” that have the ability to modify the blockchain’s semantics and potentially alter past transactions.

The vast majority of bitcoin nodes took no part in the mining activity. A dense subnetwork of bitcoin nodes was found to be largely responsible for communicating with miners and reaching consensus. The vast majority of nodes do not “meaningfully contribute to the health of the network.” Sixty percent of all bitcoin traffic traverses just three IPs.

Node operators do not face any explicit penalty for dishonesty, the report pointed out. Stratum, the standard protocol used to coordinate within the mining pool, was found to be unencrypted. Traffic on bitcoin is also unencrypted, allowing anyone in the network routes between the nodes to “observe and choose to drop any messages” they wish.

The Pentagon report comes as there is discussion about the United States issuing a Central Bank Digital Currency (CBDC). Democratic Rep. Jim Himes of Connecticut is a major supporter of issuing a CBDC.

“The longer the United States government waits to embrace this innovation, the further we fall behind both foreign governments and the private sector. … It is time for Congress to consider and move forward with legislation that would authorize a U.S. CBDC,” Himes said, according to CoinTelegraph.

During a June 23 monetary policy meeting, Federal Reserve Chairman Jerome Powell revealed that a CBDC is something that needs to be explored.

However, a Federal Reserve CBDC is being opposed by three Republican senators—Ted Cruz (R-Texas), Chuck Grassley (R-Iowa), and Mike Braun (R-Ind.)—who are pushing a bill that aims to amend section 13 of the Federal Reserve Act.

The three senators argue that America’s digital currency policy must rest on protecting financial privacy. Allowing the Fed to mobilize itself into a retail bank will allow the agency to collect personal information of users and track their transactions, they pointed out.