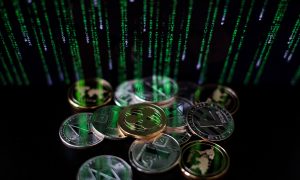 China’s Embrace of Blockchain Is Warning Shot to West
0 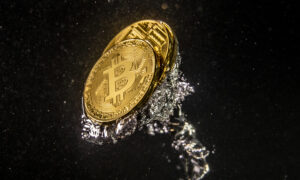 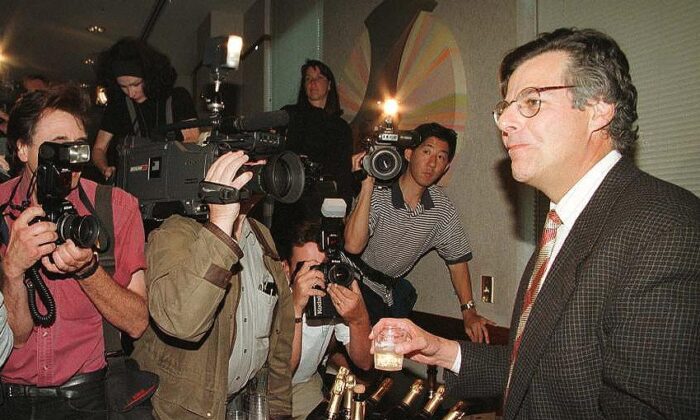 Myron Scholes, Professor of Finance, Emeritus, at Stanford Graduate School of Business, poses for photographers in Palo Alto, California, on 14 October 1997 during a press conference he gave upon learning that he has won the Nobel Prize in Economics. Scholes shared the prize with Robert C. Merton of the US, a professor at Harvard University. (John G. Mabanglo/AFP/Getty Images)
Business

A blockchain firm advised by Myron Scholes, co-creator of the famed Black-Scholes model of derivative valuation for which he won the Nobel prize, has launched a new “stablecoin” the company hopes will revolutionize cross-border exchange and become a global currency.

“SGA is the first digital currency that replicates the mechanics of central bank national currencies and applies them on a global scale,” the company said in a press release, adding that its stablecoin “acts as a bridge bringing digital currencies into the mainstream.”

Saga’s currency is similar to Facebook’s Libra in that it is pegged to a basket of fiat currencies. Unlike Libra, which is based on a set of currencies of Facebook’s own designation—including the U.S. dollar, Japanese yen, and the Singapore dollar—Saga’s stablecoin would be pegged to the International Monetary Fund’s Special Drawing Right (SDR). This is an international reserve asset composed of a basket of five currencies—the U.S. dollar, the euro, the Chinese renminbi, the Japanese yen, and the British pound sterling.

“The SDR was initially defined as equivalent to 0.888671 grams of fine gold—which, at the time, was also equivalent to one U.S. dollar,” the IMF explained. “After the collapse of the Bretton Woods system, the SDR was redefined as a basket of currencies.”

The Fund explained that while SDRs are neither a currency nor a claim on the IMF, they act as a “potential claim on the freely usable currencies of IMF members” and so can be exchanged for these currencies.

The downside of most cryptocurrencies is their extreme volatility, which while attractive to speculators, can constrain their usefulness as a medium of exchange and store of value. Saga, like Libra, seeks to address this gap in the market.

“Hyper-volatile currencies, which lack a monetary policy, are usually anonymous,” said Saga founder Sadeh Man, according to TechCrunch. “Stablecoins are pegged to other assets thus preventing their organic growth and major players in this space are opaque concerning their funds. Saga’s economy model is designed to allow growth. Participants are obliged to undergo a Know Your Customer process, assuring Saga’s economy is compatible with traditional financial institutions.”

The company said it bases its monetary model on a “blockchain-based liquidity provider: a smart contract that adjusts the supply of Saga tokens to meet market demand, and to limit the impact of fluctuations in market confidence on SGA price.”

“The proceeds of issuing new SGA tokens are kept in a reserve, held in regulated banks, and stored in liquid assets that replicate the currency composition of the SDR.”

Ido Sadeh Man, founder of Saga, said: “Currencies have not kept up with the pace of globalization and they do not address the global scope and needs of modern lives. The decreasing economic importance of national boundaries, changes in society, and a need for monetary diversification have created a necessity for a complementary, global, non-governmental currency.”

Others on Saga’s advisory board include Jacob Frenkel, the former governor of the Bank of Israel and chairman of JPMorgan Chase International.

“Technology is not enough,” Sadeh Man told TechCrunch. “The design of a currency requires a broad, interdisciplinary effort. While technology provides the tools, the essence resides in solid monetary policy. Saga has assembled a team of world leaders, combining expertise from several fields: economics, mathematics, the humanities and social sciences, to establish the new currency.”

European Union finance ministers have put a hold on the launch of global stablecoins like Libra or Saga until the bloc has formulated a strategy to mitigate the risks posed by the technology.

“When a ‘stablecoin’ initiative has the potential to reach a global scale, these concerns are likely to be amplified and new potential risks to monetary sovereignty, monetary policy, the safety and efficiency of payment systems, financial stability, and fair competition can arise,” they added.

Global cryptocurrency platform Liquid announced in a press release on Tuesday that it is the first exchange to list the Saga token for secondary trading.

“We are delighted to offer Liquid customers the opportunity to buy and trade SGA. We believe SGA offers our traders an interesting opportunity as we see great value in Saga’s approach of replicating the mechanics of central bank national currencies and applying them on a global scale,” said Liquid’s CEO and co-founder, Mike Kayamori.

“Saga is a new borderless global currency that will be used to store value, move money around the world and purchase goods and services. It is a complement to national currencies, owned and governed by the currency holders with a system of checks and balances in place,” Liquid wrote on its blog.

The Saga token will initially be traded against the USD, Bitcoin, and Ethereum, while more trading pairs are expected in the future, Liquid said.