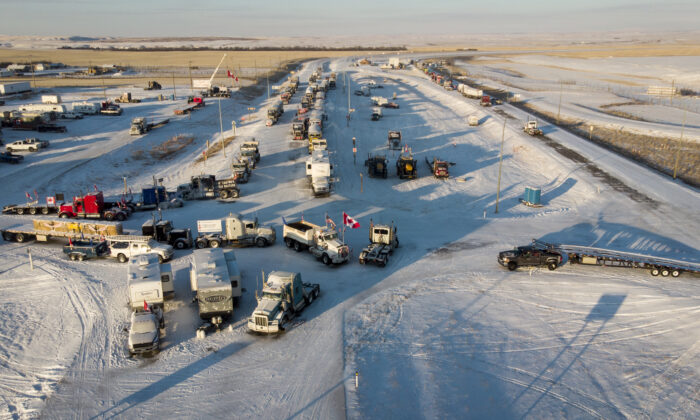 Protesters demonstrating against COVID-19 mandates gather as a truck convoy blocks the highway at the U.S. border crossing in Coutts, Alta., on Feb. 2, 2022. (The Canadian Press/Jeff McIntosh)
Canada

Protesters blocking Alberta’s main U.S. border crossing at Coutts have changed their plan to abandon their protest that began on Jan. 29.

“There was a decision made that has since been reversed,” Marco Van Huigenbos, one of the organizers of the trucker convoy blockade, told CBC News on Feb. 3.

No reason was given as to why the organizers reversed their decision. RCMP said previously that they had heard the protesters intended to pull out of the area soon, CBC reported.

Protesters agreed to clear a lane in each direction of Highway 4 after an agreement for a partial pullback was reached on Feb. 2.

Protesters have been blocking the highway since Jan. 29 in solidarity with the ongoing protest in Ottawa against COVID-19 mandates and restrictions.

Another blockade set up 18 kilometres to the north of Coutts near Milk River briefly disrupted traffic. Although traffic conditions improved by the night of Feb. 2, a large number of trucks, semi-trailers, and heavy equipment were still present the next morning, according to news reports.

In its latest update, Alberta RCMP said progress has been made at the Coutts border blockade.

“Traffic continues to flow on Hwy 4 at Hwy 501 for the border and residents of Coutts,” the RCMP said on Twitter on Feb. 4 although they asked motorists to continue to avoid the “congested” area.

Speaking during a Facebook Live  Q&A on Feb. 3, Alberta Premier Jason Kenney said his government intends to announce a “firm” date early next week to end the province’s vaccine passport while the actual cancellation date will be announced soon after.

The premier added that in the coming week the province will also announce a “phased plan” to drop almost all COVID-19 restrictions by the end of the month, provided the pressure on hospitals continues to decline.

He reasoned that Alberta’s high vaccination rate coupled with stabilizing hospital patient numbers make the rationale for continuing the vaccine passport “not as strong today” as when it was first introduced last September.

“I know that some people will say all of this is too early, that we should chase a policy of COVID-Zero, that it’s all too risky,” Kenney said.

“After two years of this, we simply cannot continue to rely on the blunt instrument of damaging restrictions as the primary tool to cope with a disease that will likely be with us for the rest of our lives.”