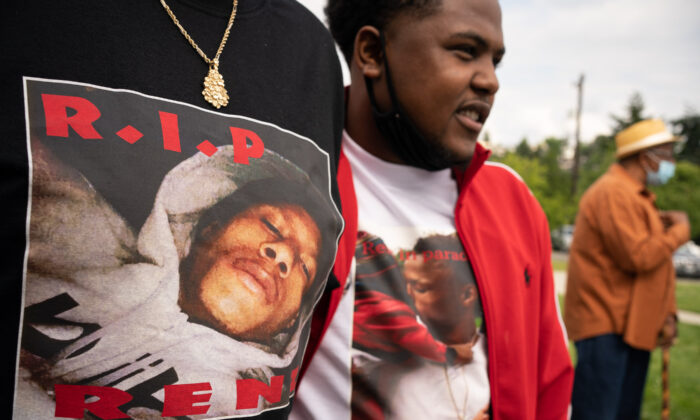 Friends and family gather for a memorial and rally for peace in memory of Horace Lorenzo Anderson in Seattle, Wash., on July 2, 2020. Anderson, who was 19, was shot and killed at the Capitol Hill Organized Protest (CHOP) zone in Seattle on June 20. (David Ryder/Getty Images)
Politics

President Donald Trump’s administration should block taxpayer funding from going to states and cities that are allowing anarchists to run rampant, members of Congress said.

The lawmakers wrote to Russell Vought, the White House Office of Management and Budget director, urging him to exercise his authority to ensure the money isn’t used “to promote anarchy.”

Taking aim at Seattle, the bicameral group noted that some city officials supported the continuation of a so-called autonomous zone even as violence, including shootings, unfolded.

The zone, known alternatively as “CHAZ” and “CHOP,” was finally cleared on July 1, some three weeks after it sprang up, after two people died.

Activists have tried erecting similar spaces in other cities, including Washington and Portland, without success.

“These anarchist zones are incompatible with the American commitment to its citizens that it is a nation based on laws. Most concerning, various city officials have used their platforms and taxpayer dollars to promote their existence, facilitate their expansion, and clean up the destruction,” the lawmakers wrote.

In Seattle, the “abysmal judgement” of the local officials has contributed to a $300 million shortfall, the federal lawmakers alleged.

“Law abiding citizens should not have to pay for their abdication of responsibility. We ask that you scrutinize any future federal funding that flows to such lawless jurisdictions,” they added.

The federal government provided over $88 billion in taxpayer dollars to the top 20 most populous cities in fiscal year 2019.

A number of those cities are now facing spikes in crime that some attribute to cuts in police funding and the rise in anti-police sentiment.

The White House Office of Management and Budget didn’t respond to a request for comment, nor did the office of Democratic Seattle Mayor Jenny Durkan.

Ernst recently unveiled a bill that would restrict federal funding for so-called anarchist jurisdictions, or jurisdictions that fail to provide police, fire, or emergency medical services due to non-governmental actors.

“Anarchy cannot continue on our streets. If city officials or state leaders fail to do their job and protect their citizens, the federal government—American taxpayers—aren’t going to pay for it,” Ernst said in a statement announcing the legislation.

A separate bill introduced by two representatives would enable individuals victimized by violent crime in a so-called autonomous zone to sue state and local authorities for compensatory damages.