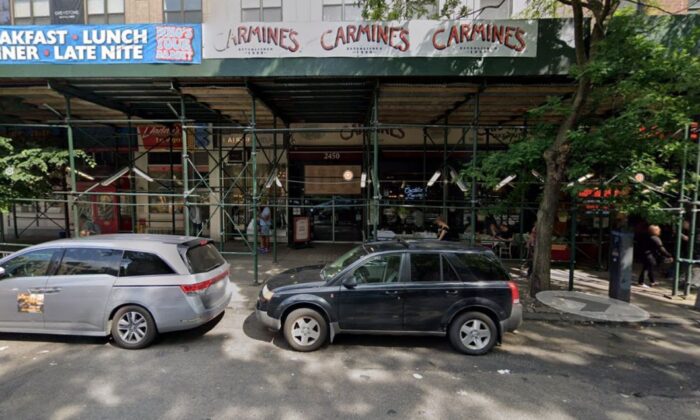 A Black Lives Matter chapter confirmed it will hold a protest at a New York City restaurant to support three black women who were arrested after a melee with a hostess who allegedly demanded they present proof of COVID-19 vaccination. A screenshot from Google Maps. (Screenshot via The Epoch Times)
NY News

A Black Lives Matter chapter confirmed it will hold a protest at a New York City restaurant to support three black women who were arrested after a melee with a hostess who allegedly demanded they present proof of COVID-19 vaccination.

Black Lives Matter Greater New York confirmed to Fox News and other news outlets that they will side with the three women—identified by officials as Kaeita Nkeenge Rankin, 44, Tyonnie Keshay Rankin, 21, and Sally Rechelle Lewis—arguing that the city’s vaccine passport is being weaponized against black people.

“I believe that this New York City vaccine passport will be used to keep black people out of spaces, and if we don’t stop it now then the police will use it as an excuse to harass and arrest our people,” a Black Lives Matter Greater New York spokesman told Fox News in a statement.

Video footage posted online last week showed a hostess with Carmine’s on Manhattan’s Upper West Side in a scuffle with several people. Lawyers for Carmine’s on Saturday told Fox that the women did, in fact, show proof of vaccination and were seated inside when the fracas started, and the altercation started when two men from the women’s party were not able to provide proof.

But Justin Moore, a lawyer for one of the women, claimed they were racially profiled and demanded the hostess be fired.

“This hostess clearly has some anger management issues and unfortunately her aggression and her violence led to something that three black women are being punished for,” Moore, of Texas, told the New York Daily News. He furthermore claimed that the hostess used a racial slur against the three and attacked one of the Rankins, sparking the melee.

“Any claim that they were racially profiled is a complete fabrication, disingenuous, and outright irresponsible,” Carolyn Richmond, the attorney, told the Daily News.

Earlier, a spokesperson for the restaurant said that one of the women physically assaulted the hostess, who was not named.

“It’s a shocking and tragic situation when one of our valued employees is assaulted for doing their job—as required by city policies—and trying to make a living,” the spokesperson told news outlets Friday. “Our focus right now is caring for our employee and the rest of our restaurant family. We are a family-style restaurant, and this is the absolute last experience any of our employees should ever endure and any customers witness.”

The three women were given tickets for assault and released by the New York City Police Department, according to local reports.

Hawk Newsome, a prominent Black Lives Matter activist in New York, wrote on Twitter and Instagram that the group will be “outside” Carmine’s restaurant on Monday at 5 p.m. “Those Sisters @CarminesNYC had proof of vaccination!” he also wrote.

The Epoch Times has contacted Black Lives Matter and Carmine’s for comment.