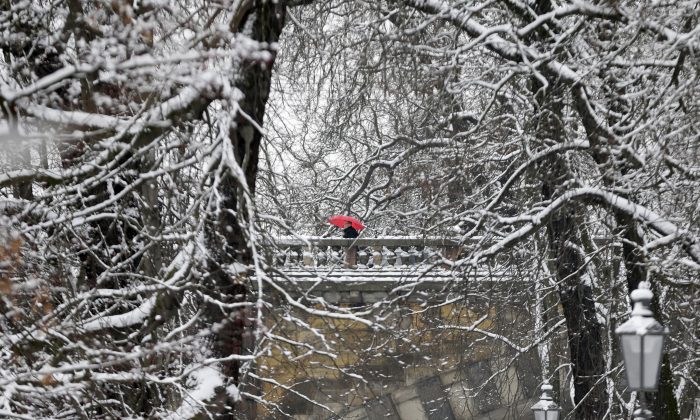 BUCHAREST, Romania—Blizzards battered parts of Eastern Europe on Sunday, forcing roads to close, trains and flights to be cancelled and producing power outages.

The snow blanketed parts of Romania, Serbia, the Czech Republic and Poland, while Croatia’s Adriatic coast was hit by unseasonably low temperatures and high winds.

Romania’s transportation ministry said 12 major roads were closed Sunday due to heavy snow and three Black Sea ports had to shut down because of high winds. Railway authorities said 20 trains had been canceled. At least three flights were also canceled.

Some 14 communities in Romania suffered power outages and the Education Ministry said schools would close Monday in Bucharest, the capital, and in other southeastern regions.

The Interior Ministry said 6,000 officers were helping to clear the snow.

Hundreds of refugees traveling from Macedonia trudged through the snow, bracing freezing temperatures to arrive Sunday at the registration center in Presevo in southern Serbia.

Milica Nikolic, a doctor at the registration camp, said the refugees risked frostbite due to the low temperatures. Aid workers inside the camp handed out warm tea and soup to the migrants Sunday before they resumed their journey to Western Europe.

Sub-zero temperatures and strong winds battered the Adriatic Sea coast in Croatia, disrupting some ferry lines and air traffic in the coastal city of Dubrovnik.