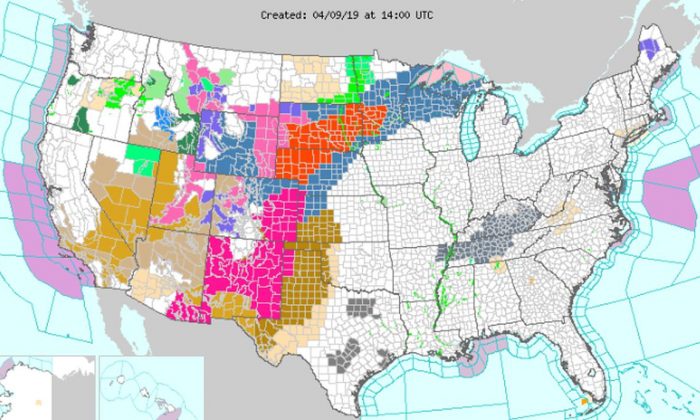 A spring winter storm has prompted blizzard warnings across the central United States, and forecasters have warned that people could be facing several feet of snow in some areas.

By midweek, the storm will hit the Upper Midwest, according to the agency, adding that it will hit Wednesday and Thursday.

Plains blizzard looking likely late next week as a strong low pressure system sweeps the Heartland. Looks like it could be another “bomb cyclone” depending upon whether it drops 24 millibars in 24 hours or not. Storm track and snowfall amounts uncertain at this time. Stay tuned! pic.twitter.com/EtAx70t6wh

“Heavy snow and strong winds will produce life-threatening travel conditions in parts of the Plains and Upper Midwest. The heavy wet snow may also lead to power outages,” said the NWS.

Some forecasters have said the storm will become a “bomb cyclone,” which means the pressure will drop at least 24 millibars over 24 hours.

#blizzard warnings (starting Wednesday) for parts of plains.#WinterStormWesley will dump lots of #snow and bring high #winds too.
I’m with @TWCChrisBruin 9am to 1pm ET on @weatherchannel pic.twitter.com/FP8lOCGHYa

BLIZZARD WARNINGS now up for much of SOUTH DAKOTA, western NEBRASKA, and southern MINNESOTA! I’m boarding a plane this evening to be LIVE from Marshall, MN tomorrow only on @weatherchannel pic.twitter.com/NoC17D4sUf

“A blizzard my friends, in April, it’s happening across portions of South Dakota up towards Nebraska and then into Wisconsin,” Fox News Senior Meteorologist Janice Dean said on the network.  “We could see over a foot of snow and windy conditions and the potential for flooding ahead of this, some ice as well.”

“In the swath of heaviest snow, disruptions to travel, including flight cancellations and road closures, are likely,” AccuWeather Senior Meteorologist Dan Pydynowski said in the report before adding that “this has the potential to include the Minneapolis-St. Paul metro area as well Wednesday night into Thursday night.”

Blizzard warnings have been posted from Nebraska to western Minnesota.

AccuWeather, meanwhile, predicted that the storm could affect up to 200 million Americans by the end of this week.

A potentially historic storm will arrive late Wednesday, bringing a variety of precip types, strong wind gusts in excess of 50 mph, and very heavy snow totals. The snowfall gradient near the metro may end up tighter than currently shown. Prepare now for a severe winter storm. pic.twitter.com/cr6KxLgUY5

After hitting the Central United States, the storm is also forecast to bring rain over the Northeast at the end of the week.

The central and mountain part of the country may get one of these every few winters, said Greg Carbin, forecast branch chief for the National Weather Service’s Weather Prediction Center in Maryland, according to The Associated Press on April 8.

“This blizzard will further exacerbate flooding in Nebraska with the added insult of heavy snowfall to eventually melt,” said Ryan Maue, a meteorologist at the private weathermodels.com. “This is more bad news for suffering farmers who are unable to flip the calendar on winter,” AP reported.

This week’s bomb cyclone one is expected to be similar in intensity and in snowfall, meteorologists said. Heavy, wet snow will fall from the Nebraska panhandle through south-central and southeastern South Dakota into western Minnesota. Wind speeds can reach 50 mph to 60 mph across Kansas.