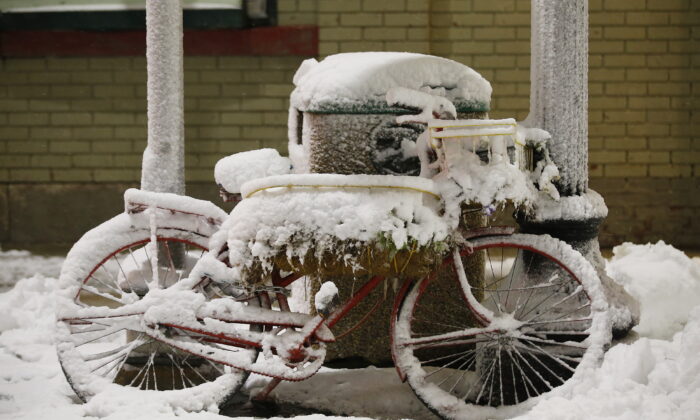 A bicycle sits covered in snow during a winter storm which caused caused fallen trees and power lines in Winnipeg on October 11, 2019. Environment Canada says a snowstorm that is approaching southern Manitoba this week may be the worst blizzard in decades. (The Canadian Press/John Woods)
Canada

A snowstorm that is approaching southern Manitoba this week may be the worst blizzard in decades, and would likely cause extended power outage in some areas, Environment Canada says.

The weather alert says the major storm will hit southern Manitoba and southeastern Saskatchewan mid-week, bringing snowfalls of 30-50 cm, strong winds gusting up to 70-90 km/h, and “zero visibility” at times.

The agency says the blizzard is caused by a Colorado low moving towards Minnesota on the night of April 12. Snow will likely start early that evening near the international border and push northward throughout the night.

Heavy snow accompanied by strong winds will hit much of the area by April 13 morning and will continue through to early April 15 morning when the low will slowly make its way through Minnesota and into northwestern Ontario. By April 15, widespread snowfall of between 30 to 50 cm is expected, with some areas reaching close to 80 cm, including in the higher terrain of western Manitoba and western Red River Valley.

Environment Canada says travelling will become increasingly difficult on April 13, with widespread highway closures “a near-certainty.” By the evening, even travelling within communities may become impossible.

“Do not plan to travel – this storm has the potential to be the worst blizzard in decades,” the alert said.

The agency also suggested that residents stock up on essential supplies as power outages are likely, particularly for rural areas which could experience extended outages.

While weather conditions should begin to improve on April 15, the cleanup after the storm will likely last well into next week, Environment Canada says.