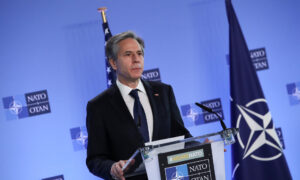 US Would Consult NATO Allies on Any Decision to Withdraw Troops From Afghanistan: Blinken
0
Share Now
TelegramFacebookTweetEmailTellMeWeReddit
Copy Link 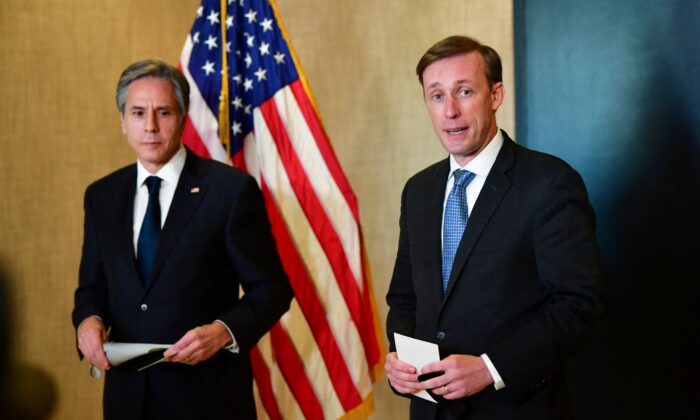 In his NATO speech, Secretary of State Antony Blinken used the word “threat” 30 times and the Chinese Communist Party (CCP) 16 times. He stressed Article 5 of the NATO Treaty, indicating European countries should join forces with the United States to deal with the CCP.

A lot of things happened this past week. Europe imposed sanctions on CCP officials and Chinese institutions, and the CCP imposed counter-sanctions on European individuals and institutions. On the issue of the Xinjiang cotton ban, the Chinese people, driven by the CCP, began to boycott hundreds of famous international fashion companies. U.S. President Joe Biden held his first official press conference on March 25, setting a record for the longest wait for the first press conference by a U.S. president.

In my opinion, there was another event last week that was extremely important, but received less attention. It was Blinken speaking in Brussels, the NATO headquarters. Unlike the European Union, which is an alliance of states and an international organization of political and economic cooperation, NATO is a purely military alliance.

Blinken’s speech is very important for this very reason.

Let’s start analyzing Blinken’s speech by looking at some statistics.

In this 3,453-word speech, the word most mentioned is “threat,” which is mentioned 28 times in total, and “challenge” is said 16 times. Basically, the word “threat” is raised in every 125 words. Of course, NATO is a military alliance that is designed to deal with threats. Blinken divides the threats he speaks of into three categories. First, military; second, technological competition; and third, the pandemic and climate. Throughout his speech, he focused on the first two, which is understandable because he was speaking to NATO.

Blinken noted that these threats are on the rise, and that “new threats are outpacing our efforts to build the capabilities we need to defend against them.” Translated into plain language, our defenses are declining, but the threat is growing.

So who’s the threat? In the entire speech, he mentioned China 12 times and Beijing 4 times. That means he mentioned the CCP 16 times. By comparison, Russia was raised four times; and North Korea and Iran were each raised once. America’s greatest enemy of the past two decades, terrorism, has been mentioned only twice. So it is clear that the “threat” he refers to is mainly the CCP, and the challenge is mainly from the CCP.

So what is threatened? Blinken said “values” 18 times, “democracy” 14 times, and “interests” only 4 times in his speech. Clearly, Blinken believes that the threat from the CCP has the greatest impact on the foundation of “values.” This foundation of course includes democracy, freedom, the rule of law, human rights, and so on.

Interestingly, Blinken specifically mentioned Article 5 of the NATO Treaty shortly after beginning his speech, which states that if one country is attacked, all countries are attacked. This clause has been used only once in NATO’s 75-year history, when NATO invaded Afghanistan after the 9/11 terrorist attack to oust the Taliban regime and eliminate al-Qaeda.

By mentioning Article 5 this time, Bliken is sending a clear message to the U.S. allies: If the United States is attacked, or if something happens, everyone will have to participate.

One hundred years ago, during the British Empire, Britain had a policy that one must be greater than two plus three, viewing Britain’s military power as the first in the world. It must remain greater than the combined military forces of those at the second and the third place, mainly referring to the European continental countries like Germany and France at that time. Some experts even believe that the current military power of the United States may be greater than one plus two plus three plus four plus five, all the way to ten. That is, the total military power of the United States exceeds the combined power of nine countries which rank second through tenth in the world.

The U.S. military may indeed be equal to the total military strength of these countries. However, during a war, military strength is not assessed in this way. There are other factors such as timing, location, and human resources. For example, a war in the middle of the Pacific Ocean is completely different from a war on the Asian coast.

In his speech, Blinken mentioned values many times. What he meant was that the NATO alliance was formed with the goal of protecting our values. This was the case at the beginning, and it is still the case now.

So if we replace Blinken’s NATO speech with the colloquial language of the Chinese outlaw folk heroes, it’ll be something like this:

Brothers, we used to fight together to uphold justice for all. We value brotherhood—if anyone was bullied, we would fight together. Now there is a new threat. Someone came to challenge my status as the big brother. I bear and forbear, but he even broke into my house, and knocked the hell out of my little brothers. You can’t watch me go up against him all by myself.

Back then, when you, my younger brothers, were in difficulty, I bent over backward to help you. All righteous people value principles and mutual trust. You can’t ignore your big brother’s life and death just because you are doing business with this person now and benefiting from your business with him. So this time, we still have to fight together. Give him an end. Beat him to quit the world.

Is that what he meant? That’s what I think he meant.

That’s why I say this speech by Blinken is so important. He’s mobilizing allies and rallying people to fight, and the target is quite clear: the CCP.

But this group fight may go beyond a military confrontation; an economic, political, diplomatic, science, and technological war may all come together. If it was just a military confrontation, it might have been easier for the United States to just take action directly. However, the situation facing the United States now is not like that, it’s facing a variety of unrestricted warfares, a variety of strategies and tactics. The Chinese are good at this, so Blinken needs to make it clear to Europe.

Therefore, I view Blinken’s NATO speech as a declaration of war against the CCP. Of course, this move is not an impromptu action, in response to a threat identified all of a sudden. Instead, the United States had already noticed it and deployed plans much earlier.

When Joe Biden ran the 2020 presidential election, he emphasized strengthening foreign relations and uniting with allies. Because Biden had previously been a member of the Senate Foreign Relations Committee for a long time, he is an expert on European affairs and is quite familiar with European politicians. Therefore, he specifically raised this issue. He agreed that the CCP was the biggest threat as well as the biggest competitor, but he did not agree with President Donald Trump’s single-handed confrontation with the CCP. He believed that he would draw on traditional allies to fight in groups.

In fact, Trump also wanted to work with allies, but his tough personality offended many people. Now that Biden has become the new president, Blinken emphasized during his foreign visits that “America is back.” He intended to say that it was Trump’s fault in the past, and promised to allies that “The United States is committed to this Alliance now and in the future.”

Europe has already begun to take action. The European Union announced sanctions on four Xinjiang officials and a Xinjiang institution last week. Although it wasn’t an impactful sanction, it nonetheless served as a cheer for the eldest brother. However, unexpectedly, Beijing became furious and retaliated by sanctioning ten Europeans and six European institutes—tantamount to a two-fold retaliation.

At this point, the drama down the road might be more intriguing. What’s to be done about the China-EU Investment Agreement? What about the China-EU strategic partnership? The trade between China and the EU last year exceeded that between China and the United States for the second year. Will there be a big change in the trade relations in the future?

For Americans, if the CCP sanctions Europe on a large scale, such as the nationwide boycott of European companies, as it did with Australia, the U.S. strategy will have already achieved more than 50 percent success. This is because the United States does not expect Europe to send out troops. As long as the European countries can cut off the political and economic ties with the CCP to a significant extent and cheer on the U.S. side, it will be good enough.

On Wednesday, Biden held the first press conference at the White House after taking office. Some Japanese media were disappointed because when Biden mentioned the CCP, he did not demonstrate a strong stance, nor did he mention supporting Taiwan or strengthening relations with Asia-Pacific allies.

In fact, oftentimes we think that we need a commander-in-chief to accomplish something, but the commander’s role is no different than a railroad traffic conductor. As the conductor is giving certain directives, you would feel that he is making a meaningful contribution. But as a matter of fact, the world has its own way of operation. It doesn’t make much difference with or without him.

Joe Biden is a weak president, sandwiched between Obama and Kamala Harris, there is also a huge and powerful Democrat team behind him. How much can he decide on his own?

Outsiders view him as the decisive figure, but insiders know his role is just like the railway traffic conductor. The train runs on a fixed track and doesn’t have much to do with the conductor’s traffic baton.

It is mainly national interests that determine the direction of a country. To put it plainly, Trump’s famous slogan “American First” is absolutely right, even though Democrats were particularly displeased with this statement. Which country would place the interests of other countries in front of their own? Such a country does not exist whatsoever. It’s just that the Democrat Party introduced many concepts and special terms to cover up the priority of American interests. In the past seventy years, the CCP has never given up its ambition of taking down the United States. Even during Hu Yaobang’s era as chairman and general secretary from 1981 to 1987, the CCP advocated the concepts of “down with capitalism” and “eliminating capitalists.” These concepts have never changed. It’s just that the CCP was powerless at the time and the United States didn’t care much about it. Of course, it’s different now.

That is to say, this fundamental conflict between the United States and the CCP is at the core of the relationship between the two countries. Whether it is expressed in terms of trade interests or values, there is actually not much difference.

An all-out conflict between the CCP and the Western world is inevitable.