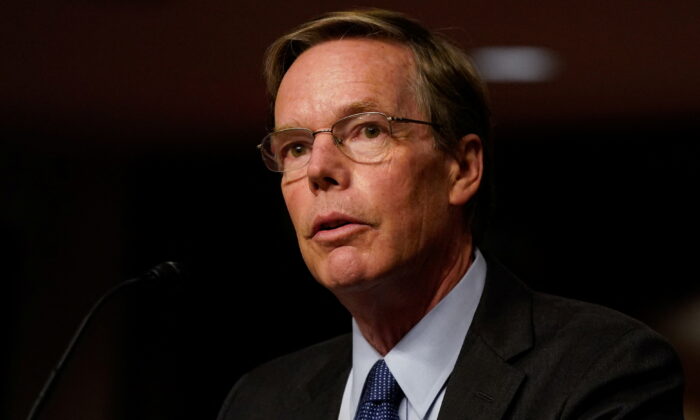 Former ambassador to NATO Nicholas Burns gives his opening statement during the Senate Foreign Relations Committee hearing on his nomination to be the U.S. Ambassador to China on Capitol Hill on Oct. 20, 2021. (Elizabeth Frantz/Reuters)
US-China Relations

“We put the speech on Weibo and WeChat, and it was censored in about 2 1/2 hours, just taken away,” Ambassador Robert Nicholas Burns said. “But it was interesting. In that 2 1/2 hours, we had lots of people in this country [China] looking at that speech.

“Three days later, we put it back on Weibo and WeChat. It was censored in about 20 minutes. That’s the game that they play.”

Burns, who’s currently in Beijing, spoke about U.S.–China relations during a June 16 virtual discussion with the Brookings Institution, a foreign policy think tank.

He said U.S. diplomatic personnel in China were dressed down by the CCP following Blinken’s speech, in which the secretary of state said the United States wouldn’t decouple from China, but would vigorously compete to maintain a free and open international order.

“We were called in, and [there were] lots of complaints about the speech,” Burns said. “I was really disappointed about this. Not surprised, but disappointed.

“We see a strengthening of the Party.”

He also said the CCP was tightening its control over the everyday lives of Chinese people.

Burns said the CCP’s repressive censorship on social media and its massive lockdowns in the wake of the COVID-19 pandemic have negatively affected his mission to represent the policies of the Biden administration and limited his ability to help the Chinese understand U.S. interests and capabilities.

“Any ambassador needs to connect with the people of the country to which they’re accredited,” he said. “It’s hard to do here, certainly, through social media because of Chinese restrictions and censorship on social media.”

Concerning the CCP’s restrictive COVID-19 lockdowns, Burns said he wasn’t allowed to leave Beijing for the first three months he was there and that he has had inadequate opportunity to engage with everyday Chinese people.

“It’s a true reflection of where we are,” Burns said. “It’s an honest assessment of where we are. [But it] doesn’t mean the bottom has fallen out of the relationship.

“We don’t want a relationship where we’re completely cut off from each other.”

Maintaining that fragile relationship would be difficult, Burns said. Particularly so, given deepening Sino–Russian engagement and attempts by the two powers to shape the international order to their own wills.

“It was a wake-up call for a lot of people around the world to see that these two authoritarian powers have a very different view of how the international order should be shaped,” he said of the partnership between Beijing and Moscow.