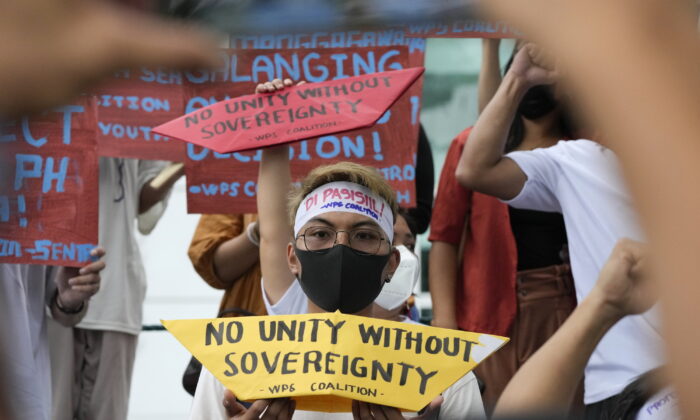 Protesters hold slogans to mark the 6th anniversary of the 2016 international ruling that declared China's claims in the South China Sea illegal during a rally outside the Chinese consulate in Makati, Philippines on July 12, 2022. (AP Photo/Aaron Favila)
International Relations

Blinken Vows US Will Defend Ally Philippines From China’s ‘Intimidation’

The United States would defend its ally the Philippines if the latter were attacked by China, according to U.S. Secretary of State Antony Blinken.

In a statement issued by the U.S. Embassy in Manila July 12, Blinken warned China’s communist leadership explicitly that Washington was obligated to defend the Philippines if its forces, vessels, or aircraft came under attack in the disputed waters of the South China Sea.

“We call again on the PRC to abide by its obligations under international law and cease its provocative behavior,” Blinken said, using the acronym for China’s formal name, the People’s Republic of China.

“We also reaffirm that an armed attack on Philippine armed forces, public vessels, or aircraft in the South China Sea would invoke U.S. mutual defense commitments.”

Those commitments include the 1951 U.S.-Philippines Mutual Defense Treaty, which dictates that the United States and the Philippines will defend one another if either is attacked. The Philippines also has Major Non-NATO Ally (MNNA) status with the United States. MNNA is a designation under U.S. law that provides foreign partners with benefits in defense trade and security cooperation.

Blinken’s comments came on the sixth anniversary of a 2016 arbitration ruling that invalidated Beijing’s vast and illegal territorial claims in the South China Sea. The arbitration was conducted in The Hague under the U.N. Convention on the Law of the Sea after the Philippine government complained about China’s increasingly aggressive actions in the disputed waters.

China did not participate in the arbitration and rejected its ruling. The United States, meanwhile, has affirmed the ruling and issued numerous reports finding that China’s claims have no legal basis.

China’s continued efforts to expand its control of the South China Sea through the creation of artificial islands and deployment of maritime militia forces to harass and intimidate others have brought it into frequent confrontations with other nations in the region, including the Philippines.

That makes the region a potential flashpoint for conflict given the United States’ close relationship with the Philippines.

Since the recognition of the Philippines’ independence on July 4, 1946, the United States has not maintained territorial claims to the South China Sea. It has, however, consistently deployed its military to patrol the waterway and ensure freedom of navigation and overflight for all in the region.

Aside from the Philippines and China, Vietnam, Malaysia, Taiwan, and Brunei have all made their own overlapping claims in the Sea, where it is estimated $5 trillion in goods passes each year. It is also believed that there are rich gas and oil deposits in the region.

In alignment with Washington, Philippine Foreign Secretary Enrique Manalo said that the 2016 ruling would be a pillar of his government’s policy in the region and rejected what he characterized as attempts to undermine the “indisputable” decision of The Hague.

“These findings are no longer within the reach of denial and rebuttal and are conclusive as they are indisputable,” Manalo said in a statement. “The award is final.”

“We firmly reject attempts to undermine it… [to] erase it from law, history and our collective memories.”

Relatedly, a poll conducted in June found that about 90 percent of Filipinos wanted the government to assert its maritime claims and increase its defense capability. The Philippines has thus far been unable to enforce the ruling, however, and has since filed hundreds of formal protests concerning China’s ever-expanding encroachment.

Blinken subsequently reaffirmed the United States’ commitment to the ruling and to the Philippines more broadly on social media.

“Six years ago today, an Arbitral Tribunal rejected the PRC’s expansive South China Sea maritime claims as having no basis in international law,” Blinken said in a tweet. “We stand by our ally, the Philippines, in defending its rights and in opposing the PRC’s provocations and intimidation.”