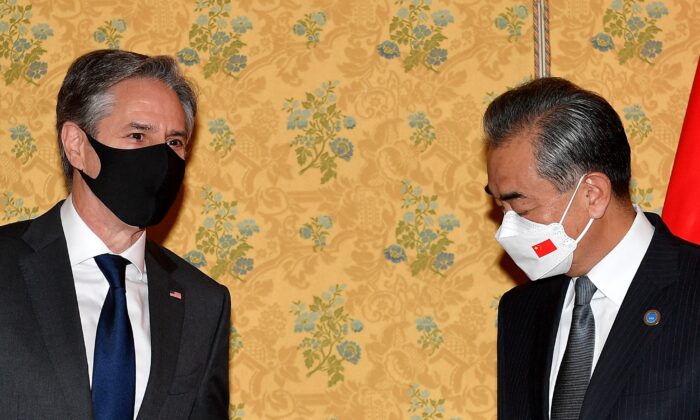 U.S. Secretary of State Antony Blinken and China's Foreign Minister Wang Yi meet at a hotel in Rome on the sidelines of the G-20 of World Leaders Summit of Rome, on Oct. 31, 2021. (Tiziana Fabi/POOL/AFP via Getty Images)
US-China Relations

U.S. Secretary of State Antony Blinken and China’s foreign minister, Wang Yi, locked horns over China’s approach to Taiwan during a phone call on Nov. 12, just three days before the leaders of the two nations hold a virtual meeting.

“The Secretary emphasized longstanding U.S. interest in peace and stability across the Taiwan Strait and expressed concern regarding the PRC’s continued military, diplomatic, and economic pressure against Taiwan,” State Department spokesperson Ned Price said in a statement.

“He urged Beijing to engage in meaningful dialogue to resolve cross-Strait issues peacefully and in a manner consistent with the wishes and best interests of the people on Taiwan.”

China’s foreign ministry issued a strongly worded statement about the phone call. It stated that Wang took a “solemn position” over what China deemed “wrong words and deeds” expressed by the United States.

According to the Chinese statement, Wang also told Blinken that the United States should “clearly and resolutely oppose any ‘Taiwan independence’ moves,” claiming that doing so would “safeguard peace” in the region.

The Chinese Communist Party (CCP) sees Taiwan as part of its territory and has vowed to seize the self-ruled island by military force if necessary. As a result, the communist regime often criticizes the Taiwanese government for seeking official ties with other countries, holding official talks with foreign government officials, and wanting to join international organizations as attempts to change the island’s status to a formal independent country.

Taiwan, formally known as the Republic of China, is a de facto independent country with its own democratically elected government, military, constitution, and currency.

Taiwan’s president, Tsai Ing-wen, in an interview with the BBC in 2020, made forthright comments about Taiwan’s sovereignty, saying there was no need to declare Taiwan an independent state, since “we are an independent country already and we call ourselves the Republic of China.”

Taiwanese people have overwhelmingly rejected the possibility of being ruled by the Chinese regime. According to a recent poll (pdf) conducted by Taiwan’s National Chengchi University, less than 8 percent support gradual or immediate unification with China, while more than 55 percent want to maintain Taiwan’s current status quo for now or permanently.

Washington, currently a diplomatic ally of Beijing but not Taipei, has provided military equipment to Taiwan for its self-defense.

Additionally, the United States holds a “one-China policy,” which asserts that there is only one sovereign state with the name “China,” although that’s different than the “one-China principle” under which the Chinese regime asserts sovereignty over Taiwan.

A day after Wang and Blinken talked, the Chinese regime openly demanded the United States accept the “one-China principle.” China’s ambassador to the United States, Qin Gang, issued the demand while speaking remotely during a meeting held by the U.S.-based organization Alliance for China’s Peaceful Reunification.

Qin also blamed the United States for the rising tensions across the Taiwan Strait.

Aside from Taiwan, Blinken and Wang also discussed preparations for the virtual talks between President Joe Biden and Chinese leader Xi Jinping. According to Price, the meeting “presents an opportunity for the two leaders to discuss how to responsibly manage competition between the United States and the PRC while working together in areas where interests align.”

The two leaders have spoken on the phone twice this year, but have yet met in person since Biden took office in January.

On Nov. 14, Taiwan’s Ministry of Foreign Affairs thanked Blinken in a Twitter post for “expressing concern regarding China’s continued military, diplomatic & economic pressure against” the island.