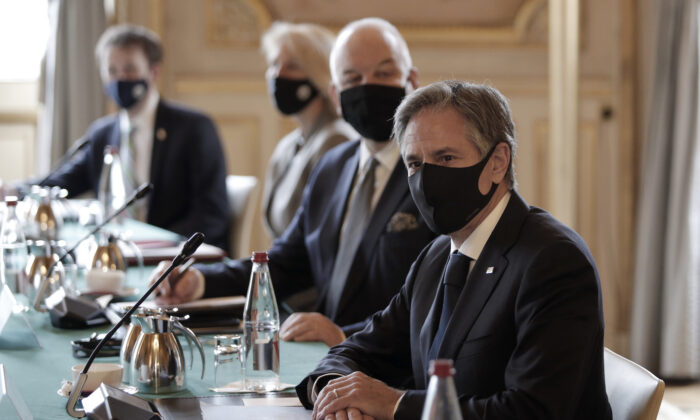 French President Emanuel Macron on Tuesday met with U.S. Secretary of State Anthony Blinken in Paris as he seeks to repair damages between the two G-7 nations after the Biden administration excluded France from a new Indo-Pacific security initiative.

France was angered over the new deal after Australia abandoned a multi-billion dollar defense deal, which provided the latter with diesel-powered submarines. Instead, Australia chose to enter into an agreement with the United States and the UK for nuclear-powered vessels.

The trilateral agreement between the United States, Australia, and the UK—which is known as AUKUS—prompted President Joe Biden to request a call with Macron in September in an attempt to cool down the dispute.

“Blinken and President Macron discussed steps forward in U.S.-French relations,” the U.S. State Department said in a statement, noting that U.S. officials look forward to Macron meeting with Biden later this month at a date and specific venue that has yet to be decided.

Blinken also met with Emmanuel Bonne, the diplomatic advisor to Macron, who said the Sept. 22 phone call between Biden and Macron was “productive,” but “a lot of hard work remains” to mend the relationship rocked by the Biden administration’s new defense partnership.

The two officials also had talks on cooperating “key strategic security areas” that include the Indo-Pacific, the Sahel region, and Afghanistan.

They didn’t elaborate on what those projects might be, but a senior State Department official said they would likely involve the Indo-Pacific and Western efforts to blunt China’s growing, NATO and other trans-Atlantic objectives involving the European Union, and counterterrorism cooperation in Africa’s Sahel region.

The one-on-one meeting came amid French demands for the United States to restore trust.

American officials have acknowledged that AUKUS could be handled better and have benefitted from coordination with France and other members of the European Union, all of which were excluded. And, while they have also signaled a desire to make amends, they have suggested France’s rage was an overreaction.

Amidst France’s rage, officials briefly recalled its ambassadors from the United States and Australia in protest over the new national security partnership. The French government accused Australia and the United States of “stabbing it in the back” and said that it would take time for the wounds to heal.

UK Prime Minister Boris Johnson told reporters in Washington on Sept. 22, speaking in both French and English, that French officials should “get a grip,” calling AUKUS a “fundamentally great step forward for global security.”

Blinken is in Paris for two days where he will attend international meetings of the Organization for Economic Cooperation and Development, while also putting a focus on repairing the rift with France.

Antonio Graceffo and The Associated Press contributed to this report.