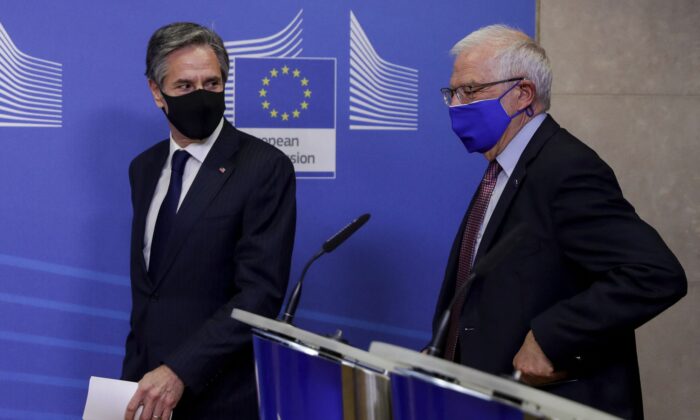 U.S. Secretary of State Antony Blinken (left) and European High Representative of the European Union for Foreign Affairs Josep Borrell arrive to give a press conference ahead of their meeting at the EU headquarters in Brussels, on March 24, 2021. (Olivier Hoslet/Pool/AFP via Getty Images)
Taiwan

The communist regime’s coercion against Lithuania was escalating, both politically and economically, and it was “impacting both U.S. and European companies,” the two leaders discussed during their phone call, according to a statement by State Department spokesperson Ned Price.

“They underscored our continuing solidarity with Lithuania in the face of the PRC’s [People’s Republic of China] coercive behavior and committed to work together to strengthen economic resilience,” it added.

According to a separate statement by the European External Action Service, Borrell told Blinken that the EU “will stand together against all political pressures and coercive measures applied against any of its members.”

The Chinese regime has launched a punitive campaign against Lithuania, following a decision by the Baltic nation to elevate its ties with Taiwan by agreeing to open a de facto embassy in the capital Vilnius, using Taiwan’s own name.

The choice of wording is significant because China sees Taiwan as a Chinese province. As a result, Beijing has put pressure on countries not to allow Taiwan to open trade offices under the name “Taiwan” or the island’s official name “Republic of China,” but rather “Taipei.”

Taiwan, a de facto independent country with its own democratically-elected government and military, currently has 14 diplomatic allies. Neither Lithuania nor the United States is Taiwan’s formal ally.

The punitive campaign has included Beijing recalling its ambassador to Lithuania and downgrading its diplomatic ties with the Baltic nation. Late last month, China announced that it has suspended granting visas at its embassy in Lithuania.

One international company that China has put pressure on was German auto parts manufacturer Continental, according to Reuters.

The call between Blinken and Borrell came one day after the U.S. secretary of state spoke to Lithuanian Prime Minister Ingrida Simonyte. During that call, Blinken expressed support for Lithuania in the face of China’s coercion.

When asked about the call between Blinken and Simonyte, Zhao Lijian, a spokesperson for China’s foreign ministry, blamed Lithuania for the “severe difficulties” in bilateral relations, during a daily briefing on Dec. 22.

Additionally, Zhao said China “doesn’t bully” other countries and accused the United States of being the country that had engaged in “economic and military coercion.”

Zhao’s remarks against Lithuania on Dec. 20—how the Baltic nation would end up in the “trashcan of history” by supporting Taiwan—drew the ire of Matas Maldeikis, a member of the Lithuanian Parliament.

“The Chinese Communist Party is threatening to ‘sweep Lithuania into the trashcan of history,’ which is ironic, because that’s where communism already is,” Maldeikis wrote on Twitter.

Lithuania was not the only issue that Blinken and Borrell discussed. According to the State Department, the two leaders also talked about their continued commitment to strengthen the U.S.-EU partnership, as well as the need for coordinated actions to support Ukraine against Russia’s military aggression.