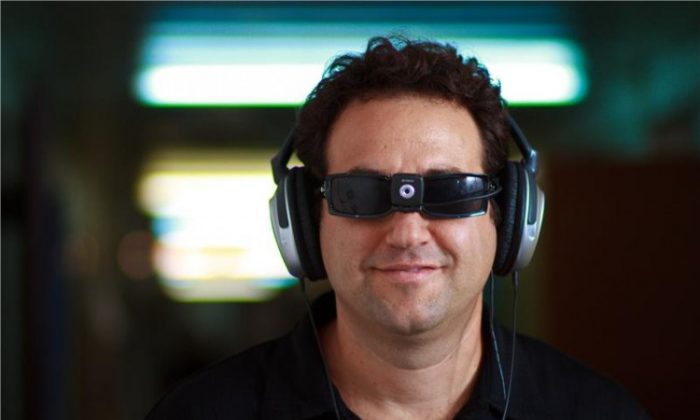 Dr. Amir Amedi wearing one of the SSD devices developed as the result of research in his lab. (Hebrew University of Jerusalem)
Science

Blind People Can Use Sounds to ‘See’

Sensory substitution devices (SSDs) can provide visual information via other senses to people who are born blind, enabling them to “see” and identify objects.

Scientists at the Hebrew University of Jerusalem have developed a visual-to-auditory SSD involving headphones attached to a camera. The images taken by the camera are converted into sounds through a known algorithm.

With brief training as part of a lab study, users interpreted these “soundscapes” to describe objects, locate people, and read words, even after lifelong blindness.

Functional magnetic resonance imaging (fMRI) revealed that the sounds activated the visual cortex in the brain of the congenitally blind, despite a lack of visual sensation from the eyes.

When SSD users identify an object’s location, the dorsal stream is activated, and when they are asked to identify an image’s shape, the ventral stream is activated. This process is similar to how a normal sighted person sees an object, and suggests that the visual cortex does not solely depend on visual sensation to interpret data and that it may be more task-specific.

The findings also imply that other areas of the brain could extract information from the external world in the absence of input, such as touch or smell, from normally corresponding sensory organs.

“The brain is not a sensory machine, although it often looks like one; it is a task machine,” concluded research leader Amir Amedi in a press release.

The study was published in the journal Cerebral Cortex