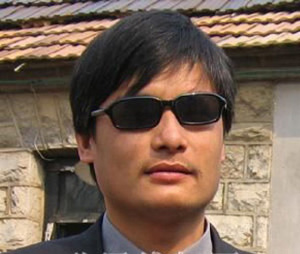 The Chinese Internet was alive with rumors that the lawyer Chen Guangcheng, following his daring escape from Shandong, escaped China and arrived in Washington, D.C.

It did not happen, however, as half a dozen media outlets that waited at the airport discovered.

Chen scaled the back fence of his heavily guarded house on April 22, and by Friday afternoon was reportedly in the U.S. Embassy, according to his close friend and activist Hu Jia.

According to the rumors, which appeared late Friday evening Beijing time, Chen was due to arrive in Washington at 7:01 pm on April 27.

He did not arrive.

Nevertheless, searches for UA898 and other UA flight numbers were blocked on Sina Weibo on Saturday. It is unclear if such searches were always blocked. The initials in English for Chen’s name, “CGC,” have also been blocked on Weibo. The term “blind man” is also blocked.

While blocking search terms related to the activist, Chinese authorities have also begun arresting his family members, according to the latest reports.

Chen gained international fame for opposing forced abortions and sterilizations connected with the one-child policy in Shandong Province. He was sentenced to four years in prison on trumped-up charges and then he and his family were placed under a very restrictive house arrest. They reported suffering severe beatings at the hands of security personnel, among other abuses.