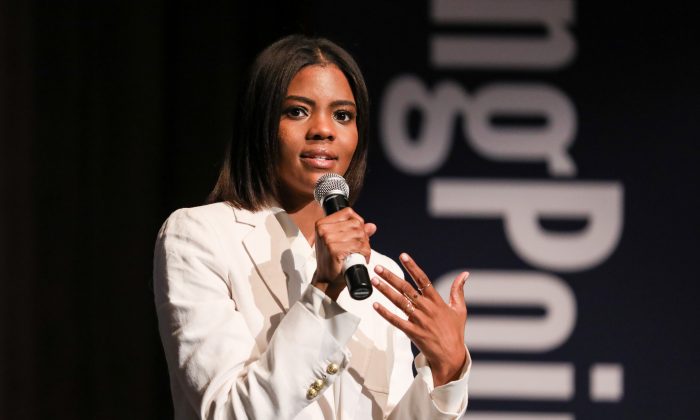 They follow in the eternal tradition of the battered leaving the batterer, the captured leaving the captor—driven by the spirit of liberty that can only come from within, when the cost of remaining silent exceeds the risk of speaking up.

One was Brandon Straka’s #WalkAway march, which speaks to heartbreak over the vilification and abuse that leftists heap upon friends and family who don’t toe the Trump-hating line perfectly.

The other was Turning Point USA’s Candace Owens’s Young Black Leadership Summit (YBLS)—a renaissance conference for young black conservatives 15 to 35, who met President Trump in The White House, bearing T-shirts initially thought to be designed by Kanye West, (which he later clarified wasn’t accurate) bearing the words: “We Free.” The core message was: “Nobody owns the black mind, and black people are not obligated to be Democrats.”

During the weekend, Owens unveiled a concept she said had come to her while she and the UK’s Brexit champion Nigel Farage were in the Green Room at the Conservative Political Action Conference watching President Trump speak.

She called it “Blexit,” shorthand for Black Exit, which signals a new liberation, or even, as some said, a new Civil Rights movement for black conservatives, to leave their long-held fraternity with the Democratic Party—forged initially during The Great Depression, with Franklin D. Roosevelt’s “The New Deal,” and peaked with John F. Kennedy and Lyndon B. Johnson’s 1964 signing of the Civil Rights Act, which outlawed public discrimination.

In 2016, only 8 percent of African Americans considered themselves Republicans, according to website BlackDemographics.com. On Oct. 29, just after Owens’s announcement of Blexit, a poll by the conservative-leaning Rasmussen Reports showed that the president’s approval rating among black voters was at 40 percent.

“We wear this logo as a symbol that we have freed ourselves,” Owens said at YBLS.

Owens, looking elegant with a white coat draped over her shoulders, took a bullhorn handed to her outside the White House and in a polished voice of controlled rage, said:

“Black lives have never, ever mattered to the Democratic Party. Black votes always have. They have created systems that we can’t get out of. The welfare system was meant to do just what it has done to our families. It has decimated our communities. The single motherhood rate in the 1960s was at 23 percent. Today, the single motherhood rate is 74 percent in the black community.”

Owens is an electric public speaker who rose to fame after making a YouTube video at home in 2017, titled: “Mom, Dad, I’m a Conservative.” The dragons she slays are familiar to all conservatives and anti-communists, starting with the one that feeds them all: identity politics.

On Mark Levin’s TV program earlier this year, she said she loves Trump, primarily for that reason: “I think what he did in this country was the most necessary thing, by killing political correctness.”

Clarifying her position on whether blacks in this country remain oppressed, a half-century after the Civil Rights Act, she said: “What has been happening to the black community is racist. The Democratic policies that have been inflicted on the black community are racist. … LBJ and the proliferation of the welfare state, and the Great Society Act.”

Looking squarely at Levin, she said: “The Left believes that black people and Hispanic people are stupid. That is why they overuse the word ‘racism’ at every turn.

“This is the politicking of fear. It has worked in the past, and it is no longer working and they are frantic and so they keep using more aggressive terminology: White supremacy and white nationalism, in hopes that they can strap us in using fear.”

Astoundingly, Owens herself has been called a “white supremacist,” along with several terms that are too racist to repeat, by leftists who claim to be torch-bearers for the eternal fight against racism. But what is more “racist” than demanding full control over black opinions and thoughts?

This isn’t the first time in Owens’s young life that she has been all over the media. But the first time, she had no control over how she was depicted, and it almost destroyed her.

In high school, in Stamford, Connecticut, where she grew up, four students, including one as young as 14, left a deeply racist message on her voicemail, and threatened to kill her. The matter was brought to the FBI, and the culprits were caught and charged. Being the “victim” of a hate crime widely reported in the press caused Owens to develop what she called a “victim mentality,” and to develop anorexia, which crippled her for four and a half years.

“I wasn’t happy being a victim,” she said. “I was miserable. I was allowing it to eat me alive.”

She finally managed to re-connect with messages of strength that had been ingrained in her by her deeply Christian grandfather, who raised her and her siblings after her parents divorced. Through prayer, meditation, and yoga, as well as quitting drinking alcohol, she pulled herself out of it, and transformed herself into the woman she is today.

Her simple message is that making somebody a victim does not help them—it is instead, a concealed form of cruel sabotage. She wants people to know that “terrible things happen to everybody.” But we all have the choice not to become a victim.

Rob Smith, a black, gay, Iraq War veteran, an out-of-the-closet conservative, and Trump supporter, was in Washington for the YBLS summit.

He lamented that issues such as keeping families together, getting married before having children, reducing crime and drugs, getting an education, have been demonized by the Democratic Party as “conservative talking points,” when really, he says, they are just “common sense.”

“They have been telling black people for years that if anybody tells you that you have a responsibility, or that you are not a victim, suddenly you’re a ‘racist.’”

“I think we make the mistake,” he said, “of thinking that the black Democratic operatives that are constantly running around the cable news networks, who have devoted their careers to pushing the Democratic agenda—a lot of times we think they speak for all black people, and they don’t.”

“People really underestimate the stranglehold that the entertainment media and music industry have on the minds of African Americans. Kanye West took a lot of scuff.

“When you look at every major African-American entertainer, singer, actor, actress, basketball player, football player, rapper, reality TV star, from top to bottom, these people are always mobilizing for Democrats and their ideas. It’s really hard to overestimate the impact of that—seeing that all the time.”

Regarding the damping effect of West’s tweeting that he hadn’t, in fact, as Owens had said, designed the Blexit T-shirts, and was backing away from the movement, Smith said: “In the grand scheme of things, I don’t think it’s a big deal. Blexit is a movement, not a moment. A lot of us will never be able to comprehend what [Kanye] sacrificed by saying the things he said over the past couple of months.

“But Kanye West did not start Blexit; Candace Owens did. It is a movement about the people, and for the people. It will survive long after this moment.”

A website, Blexit.com, was created that features videos from Blexiters such as David Harris Jr., who said:

“I am part of something absolutely beautiful: The black community. The black community in this country shares a rare camaraderie and a bond. I can travel almost anywhere in the country and just see another black American. I can give them a head nod and get one in return. That just means: You’re my brother. You’re my sister. That bond has been under attack.

“Blexit is an awakening in the minds of black Americans that I believe will change the face of America forever. It’s a movement of love and of understanding. … Blacks are exiting from the monolithic thought that has kept us in chains and bondage for far too long.”

“Since when,” Harris said, his voice rising, “should I ever have to do anything based on the color of my skin?”