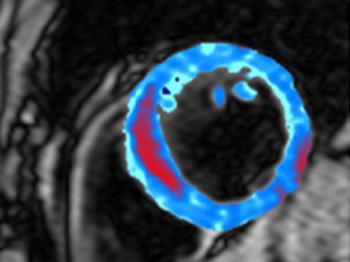 The coloured area on this MRI scan shows a cross-section of the heart muscle, with the area of bleeding shown in red. (Imperial College London)
Science

Bleeding Heart After Attack Linked to Poor Chance of Recovery

Bleeding inside the heart after a heart attack has been discovered through unprecedented images published this week.

Dr Declan O'Regan, author of the study said, "Using this new scanning technique shows us that patients who develop bleeding inside their damaged heart muscle have a much poorer chance of recovery.”

The research revealed that after being treated, some patients experience bleeding after the heart muscle begins to pump blood again.

He added, “We hope that this will help us to identify which patients are at most risk of complications following their heart attack."

Dr Declan O'Regan told The Epoch Times, “The MRI scan is sensitive to deposits of iron that we can see very accurately. The iron in the blood [from the bleeding] causes a change in signal in the MRI scan.”

Analysis of the scans showed that the amount of bleeding corresponded to the damage inflicted to the heart muscle. Patients with large areas of muscle damage from a heart attack had more bleeding than those who suffered a relatively smaller heart attack. This new insight shows that the bleeding can be used to indicate the amount of damage caused to the patient’s heart from the attack. However, further research is needed to understand the implications of this bleeding.

He added, “This is an area now being researched. The deposits of iron may possibly be toxic to heart muscle and may cause damage itself. At the moment, no one knows the extent of harm it may cause to the repair process.”

Dr Stuart Cook, the study's senior author said, "The more we understand about what happens during and after a heart attack, the greater the chances are of scientists finding new ways to combat the damage that heart attacks cause."

A heart attack occurs when an artery supplying blood to the heart becomes blocked, depriving the heart muscle of oxygen. Current treatments include placing a stent within the artery to keep it clear.

Dr Declan O'Regan  is an MRC Clinician Scientist and Consultant Radiologist. The research was conducted at the MRC Clinical Sciences Centre, Imperial College London and published this week in the journal Radiology.