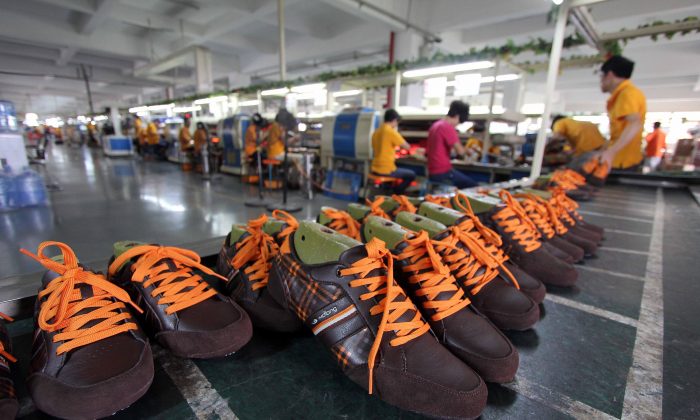 Laborers work in a shoe factory in Jinjiang, in southern China's Fujian Province on Sept. 17, 2013. In a recent report the financial Consulting firm Deloitte says that due to China's slower economic growth, its domestic manufacturing sector is facing a cold winter. (STR/AFP/Getty Images)
China

China’s final September PMI reading of 50.2, released by International investment bank HSBC and compiled by Markit Group, was one percentage point below the flash estimate and only slightly higher than the August final value of 50.1.

Purchasing Managers’ Indexes are economic indicators derived from monthly surveys of private sector companies. They are a composite indicator of a country’s economic conditions that includes new orders, employment, exports, stocks of raw material and finished goods, and more. A PMI index above 50 indicates an expansion compared to the previous month, while a reading below 50 signals a contraction. Markit Group is the principal producer of PMIs for over 30 countries worldwide.

A macroeconomic scholar in Beijing, who asked not to be named, told the Epoch Times: “The economic recovery seen recently [in China] was very short-lived and unsustainable. Usually, the fourth quarter is a relatively peak season for most industries. If the growth rate peaks in September and goes down in the fourth quarter, there is no hope for a rebound in the off season next year.”

China’s finance.sina.com.cn quoted Yu Song, a Beijing-based Goldman Sachs economist, saying that, based on HSBC’s PMI downward adjustment [from the flash estimate], the economic rebound in July and August is likely to stagnate, and may bring risks to the economic growth in the upcoming quarters.

Song added, “Goldman Sachs may need to reassess its China growth forecasts in the third and fourth quarter this year.”

Tao Wang, head of China Economics Research at UBS investment bank was quoted in the same article as saying: “Despite the economic growth in September being better than in the second quarter, the HSBC’s final PMI reading was lower than the flash estimate. The growth may have peaked in September, and future recovery may also be at a slower pace.”

Financial Consulting firm Deloitte, in a newly released report on China’s manufacturing industry, states that due to China’s slower economic growth, its domestic manufacturing sector is facing a cold winter.

Based on 51 samples from 734 listed companies, the report analyzed the manufacturing industries’ quarterly growth performances and underlying market drivers. It suggests that China’s industries, such as textile and apparel equipment, commercial trucks, construction machinery, ship building, and heavy machinery are being affected by economic downturn, overcapacity, and lack of core competitiveness. The outlook is not optimistic.

Translated by John Wang. Written in English by Christine Ford and Gisela Sommer.