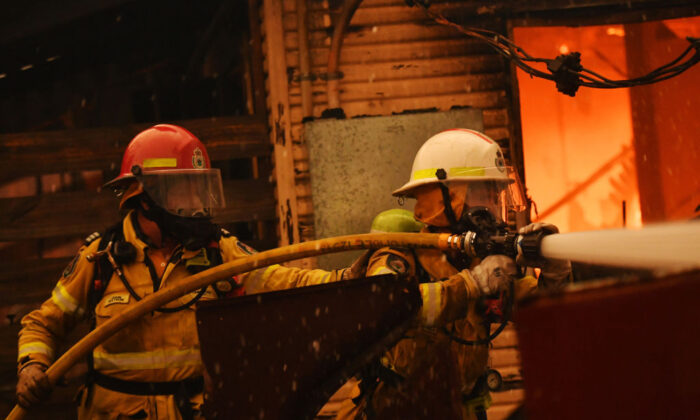 An enormous fire ravaged a A$24 million (US$16.35 million) waterfront mansion in Australia’s Sydney owned by a Chinese real estate mogul.

Firefighters were called to the Cliff Road home in the lower north shore suburb of Northwood around 11:50 p.m. on Saturday to find the six-bedroom property alight, with only the roof structure remaining.

The blaze was “quite apocalyptic” and raged for about 40 to 50 minutes, a witness told local media Nine News.

“More than 50 firefighters took just under an hour to control the fire, which had engulfed the home, causing the roof and other parts of the home to collapse,” a spokesperson said in a statement.

“Crews were able to stop the blaze from spreading to neighbouring properties.“

“One FRNSW crew remained on site overnight to ensure the fire was completely extinguished and there were no reignitions.”

The cause of the fire is being investigated.

Fire and Rescue Superintendent Tim Hassiotis said the incident was a good reminder for people to beware of fire hazards and check that their smoke alarms are working.

The house is owned by Owen Chen, founder of Chinese lender Aoyin and the fund manager ACapital. In 2018, Aoyin was sued by adviser PwC when trying to establish the first locally-incorporated Chinese bank in Australia.

Chen purchased the Northwood property in November last year, which at the time was the second most expensive house sale on the lower north shore.

Standing on a near-5,000 square metre lot, the heritage home boasts a vast garden with a tennis court, orchard, and a stone boathouse.

Alongside luxury dining and entertaining areas, the property was known for its awe-spiring views of the Lane Cove River, the city, and Anzac Bridge.

Other properties Chen and his wife Xiao Hong Li own in the neighbourhood include three large houses on nearby Arabella Street in Longueville, worth a total of $25.5 million.