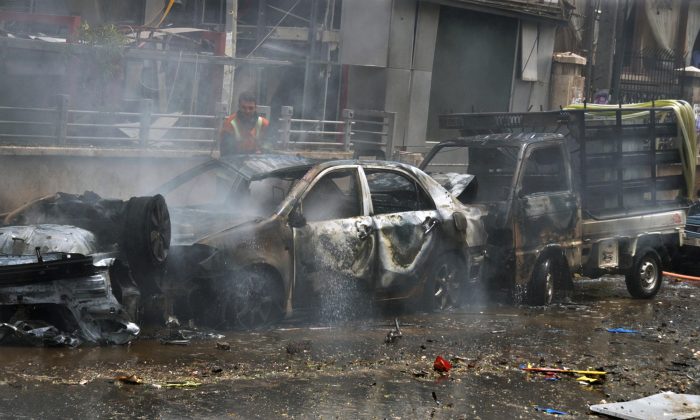 In this photo released by the Syrian official news agency SANA, a firefighter tries to extinguish a fire at the scene where one of the rockets hit the Dubeet hospital in the central neighborhood of Muhafaza in Aleppo, Syria, Tuesday, May 3, 2016. Shells and mortar rounds are raining down on every neighborhood Aleppo," said Aleppo-based health official Mohammad Hazouri, speaking from Al-Razi hospital. (SANA via AP)
Middle East

Blasts in Syria Kill 6 as Aleppo Mostly Calm After Truce

DAMASCUS, Syria—Two blasts struck a central Syrian village Thursday, killing at least six people and wounding dozens, hours after a truce brought relative calm to the northern city of Aleppo after weeks of escalating violence there.

The governor of Homs, Talal Barrazi, told The Associated Press that the blasts were trigged by a car bomb and a suicide attacker wearing an explosive belt who detonated his device in the village of Mukharam al-Fawkani. The village is east of the central city of Homs, Syria’s third largest.

The Britain-based Syrian Observatory for Human Rights said 10 people were killed in the twin blasts, adding that more than 40 were wounded.

Differing casualty figures are not uncommon in the immediate aftermaths of explosions.

The violence came as the northern city of Aleppo witnessed relative calm as U.S. officials announced late Wednesday that an agreement had been reached with Russia to extend Syria’s fragile cease-fire to the deeply contested northern city. The Syrian military said the truce, which began at 12:01 a.m. Thursday (5 p.m. Wednesday EDT), would last only 48 hours.

Defense Secretary Carter: Campaign Against ISIS ‘Far From Over’

Syrian state media reported some violations of the truce saying militants fired several shells into government-held parts of Aleppo, where some 280 civilians have been killed over the past two weeks according to the Observatory. It said Thursday’s shelling killed one person.

The opposition’s Halab Today TV reported relative calm in Aleppo province, adding that there was sporadic shelling of some villages in the province that borders Turkey.

On the other side of the border, a salvo of rockets struck southern Turkey, wounding four people, Turkey’s state-run news agency said. The Anadolu Agency said three rockets struck the Turkish town of Kilis early Thursday.

The rockets were fired from IS-controlled territory in Syria, according to the private Dogan News agency. It said one policeman was among the wounded and broadcast images of damaged buildings and vehicles.

Such incidents have become a regular occurrence in the border town, which is home to a significant Syrian refugee population.

Turkish President Recep Tayyip Erdogan warned IS on Wednesday that no attack on Turkey would go unanswered.

Cross-border fire has left 20 people dead and dozens of others wounded this year.

The Turkish military typically fires back in line with its rules of engagement.