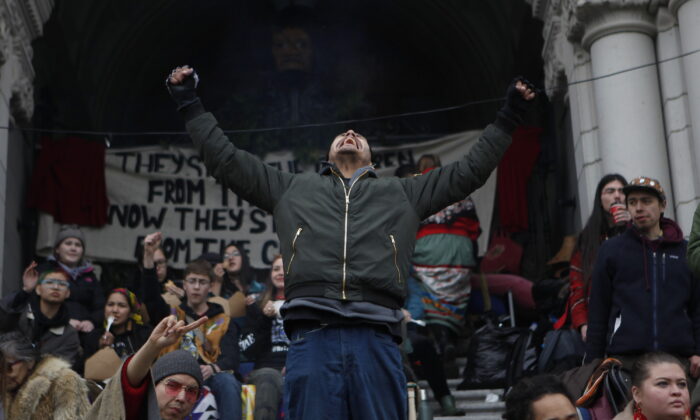 Protesters in support of Wet'suwet'en hereditary chiefs camp out on the steps of the B.C. legislature before the speech from the throne in Victoria, B.C., on Feb. 11, 2020. (THE CANADIAN PRESS/Chad Hipolito)
Canada

Former Haisla Nation chief Ellis Ross says media and politicking over Indigenous rights are indirectly to blame for the spate of disruptive blockades in some of Canada’s major cities.

He says the “communication campaign” presenting the idea that First Nations’ rights and title are being trampled upon is “not what’s actually happening.”

“The media is picking out less than 1 percent of the story and then plastering it all over the newspapers and the TV stations,” he says.

“But nobody wants to talk to the 99 percent of the other Aboriginals who live in the area, who are actually OK with the consultations, accommodations, and inclusion in the process. It’s just not sexy or controversial enough.”

After hereditary Wet’suwet’en supporters who blockaded access to Coastal GasLink’s right-of-way were arrested and removed on Feb. 6, a backlash resulted in Indigenous-led blockades of Canada’s busiest commuter rail line between Montreal and Toronto, in their seventh day as of Feb. 12.

Protesters also blocked highways on Vancouver Island; blocked bridges in B.C.’s capital Victoria and the B.C. legislature as well as intersections in Vancouver; blocked downtown thoroughfares in Toronto, where others continue to occupy Indigenous Affairs Minister Carolyn Bennett’s office; and blocked the Department of Justice building in Ottawa.

“We have explained our demands to [Justice Minister David Lametti], that he meet with hereditary chiefs … that RCMP leave that territory and the people that have been detained and arrested are allowed back to their territories,” Sophia Sidarous, an Indigenous youth involved with the Justice building occupation, told media.

“If anyone could do that, it would be the attorney general. … The Constitution and Section 35 is what’s at stake here.”

The protesters said they would give Lametti 24 hours to show good faith, and if he fails to respond, “then reconciliation is dead.”

Reconciliation with Canada’s Indigenous Peoples has become one of the aims of the federal Liberals since Prime Minister Justin Trudeau was voted into power back in 2015.

On Feb. 11, Transport Minister Marc Garneau noted that the rail blockades would hurt the Canadian economy, as commercial transport operators such as CN Rail are also obstructed. He said the government “is seized of the issue” and wants a quick resolution, but he didn’t say how the government intends to solve it.

Ross doesn’t think a solution will come easily, especially in the broader sense.

‘No Reason to Bring in UNDRIP’

Ross said B.C. Premier John Horgan’s decision to pass the United Nations Declaration on the Rights of Indigenous People (UNDRIP) in November 2019 has muddied the waters of expectations and exacerbated the situation.

“The federal government and the NDP provincial government are at fault here as well, because they’re playing politics with people’s lives, with Aboriginal issues,” he said.

“There was no reason to bring in UNDRIP because you had fully developed case law that breathed life into Section 35 of the Constitution. Then he brings in this U.N. declaration and you reset the whole thing, and now nobody understands what the rights are.”

Section 35 in Canada’s Constitution Act of 1982 guarantees Indigenous treaty rights as they extended from the Royal Proclamation of 1763, and it has been guided by hundreds of court rulings siding with Indigenous litigants.

“If you really want to talk about it in terms of what the benefits are, you’re really addressing Canada’s shame and you don’t have to dump out any more tax money,” said Ross, who suggests the country is currently rudderless on the Indigenous file.

“Just allow this process of a three-way negotiation to happen and guaranteed, the benefits will address Canada’s shame, which is native poverty. It all comes down to leadership, and in this situation, I can’t tell who the leadership is.”

Ross said he left Indigenous politics in 2017 to run as a member of the legislative assembly of B.C. to help bring Coastal GasLink—the final piece to feed the Kitimat LNG terminal—to fruition because he saw the transformation of his own community but could do little more as a local chief.

“Liberals brought the LNG project almost to the finish line, before we lost the legislature. … When I started as chief, one of our mandates was to reduce the welfare list, which was impossible because there were no jobs,” he explained.

“But because of Kitimat LNG, we’re no longer dependent and our people are no longer suffering under poverty. The next generation is a lot stronger than my generation was in terms of their future. That’s what these protesters are not looking at.”

As for Indigenous reconciliation, Ross says in his community it’s a non-issue.