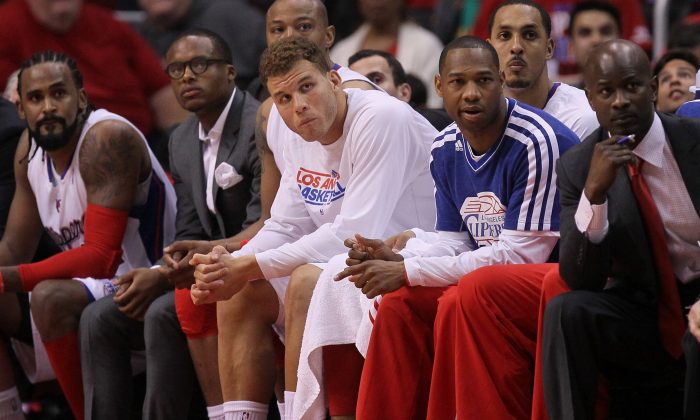 Blake Griffin #32 (center, in white) of the Los Angeles Clippers watches from the bench after leaving the game with an ankle injury against the Memphis Grizzlies during Game Five of the Western Conference Quarterfinals of the 2013 NBA Playoffs at Staples Center on April 30, 2013 in Los Angeles, California. (Stephen Dunn/Getty Images)
NBA

Blake Griffin hurt: The Clippers star big man had to leave the game in the third quarter in a 103-93 loss to the Memphis Grizzlies.

Griffin played through the first half but had to leave six minutes into the third quarter. Clippers’ training staff said that Griffin was in too much pain to continue; the star was only 2 out of 7 from the field.

Griffin’s loss hurt–both the team, which lost, and him.

Griffin was in an ice bucket in the training room watching the team try to come back and decided to limp back out on the bench.

“They had me in the ice bucket for 20 minutes and I was watching the game on the TV in there, and I didn’t feel like I was out there with my team, so I just wanted to be out there,” Griffin told ESPN.

Griffin playing at all was a surprise, after his right ankle swelled to the size of a softball on April 29 after practice, according to ESPN, after he suffered a high ankle sprain.

Griffin said he couldn’t believe that the injury happened in practice.

“I’ve never had one this bad before,” Griffin said. “Normally I can go in a couple of days or the next day.”

“As the game went on, it got worse,” Griffin said. “I was in the weight room on the treadmill; they just had me walk just to keep it lose and not just sit there.”

The Clippers head back to Memphis for game 6 on May 3. The team is now down 3-2 in the series.