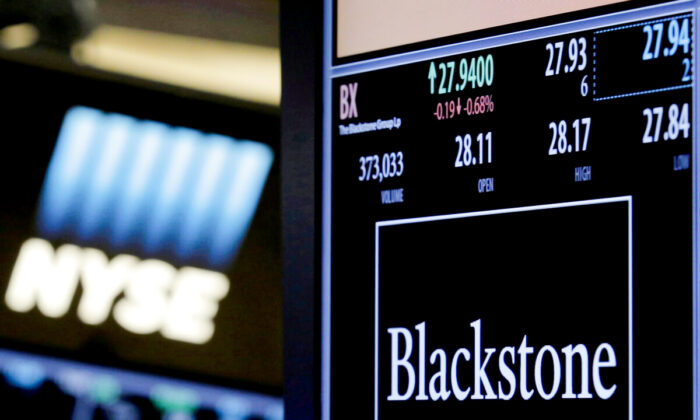 The ticker and trading information for Blackstone Group is displayed on the floor of the New York Stock Exchange on April 4, 2016. (Brendan McDermid/Reuters)
Investment

Blackstone and Goldman Sachs are looking to increase their investment presence in Asia, the companies confirmed.

In a fourth-quarter conference call last week, Blackstone—the world’s largest alternative asset manager—confirmed that it has amassed $11 billion to acquire companies in Asia in its second private-equity fund for the continent.

It raised $6.4 billion and will receive $4.6 billion from Blackstone global funds.

In this round of fundraising, investors were intrigued by Blackstone’s returns, its focus on sustainable investing (also known as ESG), and the company’s geographical diversification.

Despite swelling inflationary risks and geopolitical concerns, the company has been expanding its footprint in the region. Its first private-equity fund was concentrated in India, while the second endeavor will situate Blackstone’s investments across Asia-Pacific.

Blackstone confirmed that it’s negotiating three deals in Australia, India, and Japan. It’s also working on a potential agreement with a Chinese consumer firm and a South Korean business. The Wall Street titan also has real estate investment vehicles in the “pipeline.”

Over the past year, governments in the region, particularly the regime in China, have clamped down on a broad array of sectors, particularly technology. But the firm says it’s unconcerned by these actions.

“Government-related issues play a little role in our decision making.”

The New York-based asset manager has an objective of managing $1 trillion by 2026. After a record $155 billion in the October-to-December period, the firm is inching closer to the goal, and ahead of schedule.

“At our Investor Day a little over three years ago, we shared our vision of reaching $1 trillion of AUM in eight years,” said Steve Schwarzman, chairman and chief executive officer of Blackstone. “We now believe it will reach $1 trillion of AUM this year [in] half the time we predicted.”

In a note last month, the financial institution warned that China could choose to stay shut for the rest of the year and possibly into the second quarter of 2023.

Since the fall, Beijing has adopted a zero-COVID strategy as part of efforts to contain outbreaks. This has involved quarantine requirements, hard lockdowns, and disruptions to production, encouraging analysts to sound the alarm about a period of stagflation.

These conditions prompted Goldman to slash its gross domestic product (GDP) forecast for 2022, warning that growing restrictions on business activity would weigh on growth potential.

“In light of the latest COVID developments—in particular, the likely higher average level of restriction (and thus economic cost) to contain the more infectious Omicron variant—we are revising down our 2022 growth forecast to 4.3 percent, from 4.8 percent previously,” Goldman Sachs analysts Hui Shan and a team wrote in a report (pdf) in January.

This might prompt Beijing to boost liquidity and ease credit conditions by cutting its reserve requirement ratio, the amount of reserves banks are mandated to hold.

Despite these trends, Goldman is also casting its investment and wealth management shadow over the Chinese market.

“The short-term focus on our China business will still be to provide Chinese clients with investment banking and investing services,” Todd Leland, co-president of Goldman Sachs for Asia Pacific, told Caixin. “At the same time, our investment in wealth management and asset management will increase. Although the base is not large, the growth rate will be very fast.”

He further revealed that the company’s private investment strategy will hone in on health care, corporate, and consumer services. There will also be a focus on environmental, social, and governance (ESG) investing.

As China liberalizes its financial markets to generate more capital, a growing number of Wall Street firms are planting new roots or establishing a larger corporate presence in the world’s second-largest economy.

But has this been a profitable investment in 2022?

For the first time since the early days of the U.S.–China trade dispute in 2017, mainland equities have slipped into a bear market. The CSI 300 Index of mainland stocks tumbled to a 16-month low, and the MSCI China Index slid to a 21-month low.

In addition to slumping equities, credit-market contagion is widening and government bonds are sliding.

But Wall Street juggernauts, from BlackRock to JPMorgan Chase, say they’re not too concerned. They’ve become overweight in Chinese stocks, predicted notable gains this year, or are convinced that the rout is exaggerated.

In response to the recent downturn in stocks, market observers purport that the selloff has been overdone, making many Chinese stocks attractive.

“Although risks around the Chinese growth outlook remain due to the zero-tolerance COVID-19 policies and regulatory tightening, Chinese equity markets already reflect some of those risks, offer attractive valuations and continue to be underinvested,” Goldman Sachs strategists led by Christian Mueller-Glissmann wrote in a note on Jan. 31.