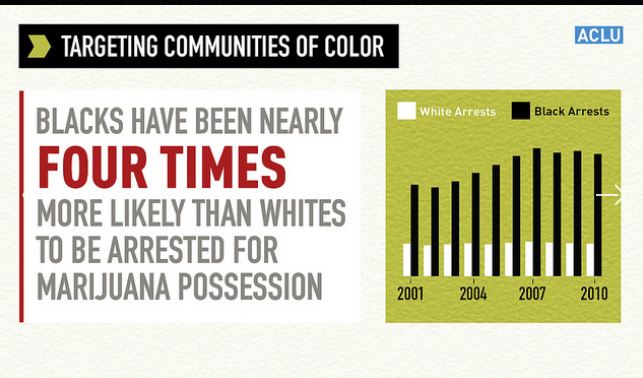 Part of a report from the American Civil Liberties Union that analyzed state and local law enforcement agency data. The Liberties Union found blacks are arrested more than whites. (Screenshot/ACLU)
US

Blacks More Likely to Be Arrested for Pot Possession: ACLU

Blacks are 3.73 times more likely to be arrested for marijuana possession despite using the drug at about the same rate as white people, according to a new data analysis by the American Civil Liberties Union.

The likelihood rises considerably in some states—blacks in Iowa, Minnesota, and Illinois, as well as the District of Columbia, were 7.5 to 8.5 times more likely to be arrested for marijuana possession. The data analyzed came from state and local law enforcement agencies

Ezekiel Edwards, lead author of the ACLU study, attributed the disparate arrest rates to racial profiling by police seeking to pad their arrest numbers with “low-level” arrests in “certain communities that they have kind of labeled as problematic.”

“While this country moves in some ways in a more progressive direction on marijuana policy in a lot of places, in other places, people are getting handcuffed, jailed and getting criminal records at racially disparate rates all around the country,” Edwards said.

Some counties are arresting blacks for marijuana possession in disproportionate numbers. In St. Louis City, MO, 18.4 black persons are arrested for every one white person, for instance. Kings County, or Brooklyn, in New York has the 1oth largest racial disparity in arrests, with 1,554 blacks being arrested per 100,000, while 161 whites per 100,000 are arrested.

Many of the arrests impact the rest of the life for the person arrested, such as in the case of DeMarcus Sanders in Waterloo, Iowa. He was pulled over and had his car searched. After the police officer found a marijuana seed on the floor, he was arrested and sentenced to 30 days in jail, during which time he was let go from his job. Losing his driver’s license may have been the biggest impact, because there is not much public transportation in the area.

Overall, the war on drugs—particularly the emphasis on enforcing laws against pot—has negatively impacted the United States, causing over seven million people to be arrested for possession of marijuana from 2001 through 2010, according to the union. In 2010, one pot bust was made every 37 seconds. The organization says billions of dollars have been wasted enforcing marijuana laws.

“Despite being a priority for police departments nationwide, the War on Marijuana has failed to reduce marijuana use and availability and diverted resources that could be better invested in our communities,” the study introduction reads.

Police simply operate from the standpoint that “the use of marijuana is a crime,” said Jim Pasco, executive director of the National Fraternal Order of Police.

“We will try to educate our membership, to the extent the statistics are valid, to be aware (that) people other than blacks are smoking marijuana and to arrest them too,” said Pasco, who had not yet seen the ACLU report.

Arthur Burnett Sr., a retired judge of the Superior Court of the District of Columbia, said his 40 years on the bench showed him that police concentrate their numbers in black communities. It’s easier to catch people with marijuana in communities where there are “open-air” drug markets, rather than looking in homes, basements or country clubs, said Burnett. He is the CEO of the National African American Drug Policy Coalition based in Washington.

Burnett said some black defendants, distrustful of authorities, may lash out, use profanities or be rebellious — behavior that makes it more likely that an officer will make an arrest. Burnett said his coalition supports forming a commission to look at scientific evidence on the effect of marijuana use and “overcriminalization” of it.

The commission would determine whether to treat marijuana like tobacco, in which people are warned about consequences of its use. It would also examine the harshness of penalties for using pot.

“We don’t need to treat it like heroin and cocaine,” Burnett said.