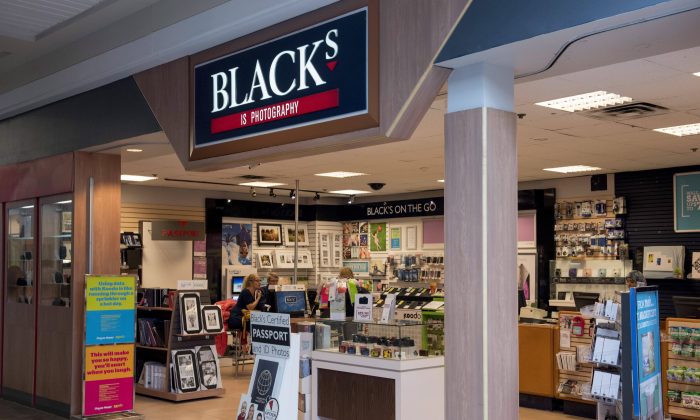 A Blacks photo store is shown in Ottawa on June 9, 2015. (The Canadian Press/Justin Tang)
Business

TORONTO—One of Canada’s best-known photography chains is closing its doors after nearly 70 years, a victim of technological advances that it struggled to keep up with.

Blacks, a storied company that became synonymous with cameras, pictures, and family albums, will shutter its 59 stores across the country by Aug. 8, its parent company Telus announced Tuesday, June 9.

The move will see about 485 employees lose their jobs, most of which are in Ontario.

“It’s no secret that the photography market has been constantly and mercilessly disrupted by technology, which used to be a robust market. And Blacks never really made the transition to the professional market, and then again they never really moved online either.”

Company spokeswoman Luiza Staniec said Blacks was unable to generate profitable growth over the last year and it would’ve required further investments to adapt to a changing market.

“Technological innovations have changed the way Canadians take and share photographs, with fewer of us using retail photo outlets,” Staniec said in a statement.

She said an unspecified number of the laid-off employees will be offered jobs at Telus or Koodo head offices, as well as at retail outlets or call centres, while others would be offered a “transition package.”

“They have a fair amount of cameras and that market is in significant decline,” Winder said.

“If you go back 10 years ago, folks bought digital cameras. Now everyone has digital cameras on their smartphones. The market is polarized and you’re either a professional camera enthusiast and you go to Henry’s, or you don’t and you use your cellphone like 99 percent of the other people.”

Winder said when Telus Corp bought Blacks in September 2009 for $28 million from ReichmannHauer Capital Partners, it was simply to add another distribution channel for the telecom giant. He said Telus hedged its bets on a bricks-and-mortar approach just in case it was a lucrative market. It obviously wasn’t, he said.

“Telus is so big that they can certainly absorb this,” he said.

The news closes the chapter on a company that began in midtown Toronto in 1930 when Eddie Black launched a radio and appliance store.

In 1939, with a royal visit approaching, Black noticed an interest in photography and added cameras to his store, which quickly sold out, according to “The Story of Blacks Photography,” a book written by Robert Black, one of his four sons.

So the elder Black stocked more cameras, which continued to sell.

Robert Black and his brother Bill worked at their father’s store, delivering refrigerators and stoves in the 1930s and 1940s.

Tired of the back-breaking work, the pair approached their father with a proposal.

“We asked him if we could use half the store to take a crack at selling guns, fishing tackle, and cameras,” Robert Black wrote. Their father agreed and financed the operation. That was in 1947.

The family’s two younger brothers would join Robert and Bill to take control of the business in 1961, and by 1969 the company went public.

Since then, it has changed hands a few times.

The Blacks sold the business to Scott’s Hospitality, which was primarily a food business, for $100 million in 1985.

ReichmannHauer Capital Partners had purchased the chain in 2007 for an undisclosed price before selling it to Telus for $28 million.