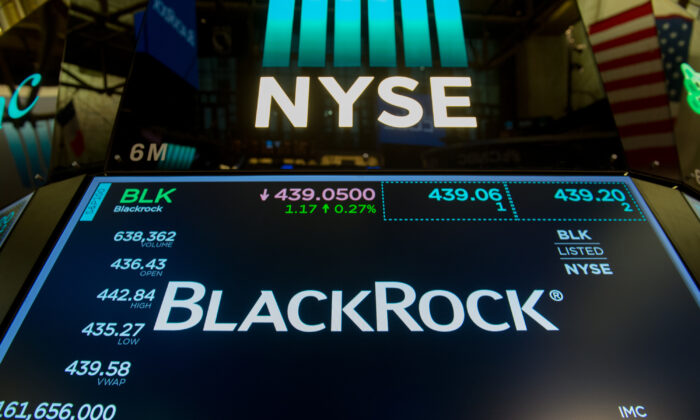 The trading symbol for BlackRock is displayed at the closing bell of the Dow Industrial Average at the New York Stock Exchange in New York on July 14, 2017. (Bryan R. Smith/AFP via Getty Images)
Companies

BlackRock, the world’s largest investment management firm with about $8.49 trillion in assets, recorded a $1.7 trillion loss in the first half of 2022, according to the company.

This was the largest sum of money ever lost by a single company in a six-month span, according to Marc Rubenstein, a Bloomberg analyst.

“The first half of 2022 brought an investment environment that we have not seen in decades,” Fink said in a statement. “Investors are simultaneously navigating high inflation, rising rates, and the worst start to the year for both stocks and bonds in half a century, with global equity and fixed-income indexes down 20% and 10%, respectively.”

Rubenstein said the investment titan had also focused too much on passive investing, writing that only one-quarter of BlackRock’s assets were actively managed “to beat a benchmark” by the end of the April-to-June period. In total, the company’s passive equity holdings are 10 times larger than its active strategy, “although it does operate some active multi-asset and alternatives strategies that narrow the gap,” he noted.

The earnings report also highlighted slower inflows into the New York-based firm’s core investment funds, totaling $69 billion in the three months ending on June 30. That’s $40 billion less than what analysts had forecast and a decline from the $114 billion in the previous quarter.

Today, BlackRock’s largest holdings are concentrated in technology, with positions in Apple, Amazon, Microsoft, and Tesla.

“There was little in wide-moat-rated BlackRock’s second-quarter earnings that would alter our long-term view of the firm,” Greggory Warren, a sector strategist at Morningstar, wrote in a recent note. “We are leaving our $850 per share fair value estimate in place and consider the shares to be undervalued. BlackRock continues to be our top pick among the more traditional U.S.-based asset managers we cover. The company’s shares are currently trading at a 30% discount to our fair value estimate—compared with 20% on average for the nine firms in our coverage—and it represents a solid entry point for long-term investors.”

Additionally, BlackRock confirmed that it’s tightening its belt and delaying its hiring efforts.

General and administrative costs climbed by 12 percent year-over-year, driven mainly by higher expenses related to workers returning to the office, from computer equipment to health and safety investments.

“We are mindful of the current environment, and you are proactively managing the pace of what I would call certain of our discretionary investments,” Chief Financial Officer Gary Schedlin told analysts in a call.

The company also revealed that it will be exploring digital assets, despite Fink calling Bitcoin an “index of money laundering” in 2017. He revealed that institutional investors are still interested in that corner of the market, even though digital currency prices have cratered this year.

“The crypto asset market has witnessed a steep downturn in valuations over recent months. But we’re still seeing more interest from institutional clients about how to efficiently access these assets,” he said.

Fink told analysts that BlackRock clients are turning heavily to cash as a safe-haven asset in the current highly volatile market.

“Now an inverted yield curve has made cash not just a safe place but now also a more profitable place for investors,” he said.

The 2- and 10-year yields have inverted, and the spread is about minus 25 basis points, the deepest inversion in more than two decades, according to Nancy Tengler, the CEO and Chief Investment Officer at Laffer Tengler Investments.

Indeed, the Bank of America’s July survey of fund managers found that investors are parked in cash at the highest rate since 2001, while their stock allocation is the lowest since the financial crisis of 2008–09.

Despite the sharp sell-off in the equities arena, Fink is confident that investors can relax a little bit.

“A really famous person called me up, panicking, ‘What should I do, I’ve got to get out, I can’t stand it, I can’t stand it.’ And I said, ‘Go on vacation,’” Fink said in an interview with CNBC’s Jim Cramer. “If you really can’t stand it, then sell it. But the reality is, we’ve seen this. Inflation is going to be fixed over time.”

About the prospect of a recession, Fink thinks that if the United States is in the middle of an economic downturn, “it’s going to be quite mild.”

“The financial foundation of America is as strong today as ever,” he said.

BlackRock shares have tumbled by about 30 percent year to date.