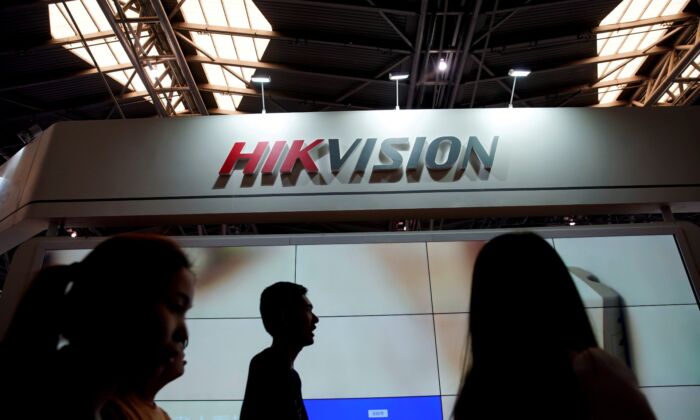 People visit a Hikvision booth at the security exhibition in Shanghai, China, on May 24, 2019. (Aly Song/Reuters)
China Human Rights

By selling the solution, according to the report, Hikvision implements access control, biometric data analytics, behavior detection, and perimeter analytics to detect physical conflicts, intruders, escapees, etc. The analytics will also alarm if the interrogator is absent or falls asleep.

A promo video released by Hikvision in 2018 shows that a detainee, strapped into a tiger chair during the interrogation, will be filmed by multiple Hikvision cameras from different angles. The devices are connected to the Interrogation Console, a customized network video recorder (NVR ) with a screen, CD burner, and space for hard drives.

Hikvision’s interrogation solution also permits the interrogation to be filmed while staff transcribe it into a laptop for detainees to sign on the spot. The automatic printing of transcripts raises concerns about forced confessions, however.

Although China’s top court banned torture in 2013, police justify the use of tiger chairs for interrogations attempting to extract a forced confession. The device has long been accused of weakening one’s body as the person is strapped in and immobilized in an unnatural position over a long period of time.

Beijing has claimed that the tiger chair is designed not to inflict pain but to ensure that prisoners do not hurt themselves. Yet this statement goes against a report by Human Rights Watch, as former detainees said they had been “strapped in this metal chair for hours and even days, deprived of sleep, and immobilized until their legs and buttocks were swollen.”

Official data shows China’s conviction rate is 99.96 percent as of 2019. Unlike the United States, the criminal law in China grants detainees no right to an attorney during interrogation.

The tiger chair is far from the only torture processes commonly used in communist China’s jails, labor camps, and “reeducation” centers where religious adherents are forced to renounce their faith.

The Chinese regime’s crackdown on ethnic and religious minorities in Xinjiang—subjecting them to abuses that include torture, sterilization, political indoctrination, and forced labor—has been denounced as “genocide” by Canada, the Netherlands, the UK, and the United States.

“We have 108 types of torture methods! Do you think you’ll leave here alive?” the head of the No. 3 Division at the Jilin Women’s Forced Labor Camp in northeast China, threatened a spiritual believer in July 2012, according to a report by Minghui.com two years later. Minghui is the U.S.-based website that tracks the persecution of faith group Falun Gong in China.

Hikvision did not respond to a request for comment.

Despite human rights concerns, the world’s largest video surveillance company, that is controlled by a Chinese military-industrial group, has been listed as a threat to U.S. national security because of this link and banned since 2019.