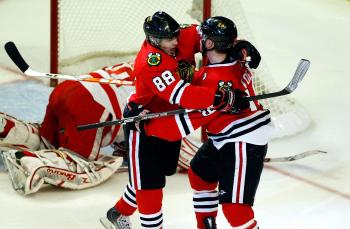 MORE TO COME: Patrick Kane (left) and Jonathan Toews give the Chicago Blackhawks a solid foundation to build on. (Jim Prisching/Getty Images)
Hockey

Blackhawks Will Learn From Red Wings

By Karl Yu
biggersmaller
Print
The consensus among various panels and talk shows is that this has been the best Stanley Cup playoffs in some time.

Fans have seen many exciting, high scoring games with plenty of opportunity for the young stars—Pittsburgh Penguins’ Sidney Crosby and Evgeni Malkin and Chicago Blackhawks’ Patrick Kane and Jonathan Toews for instance—to showcase their skills.

In the second-round of the NHL playoffs, we were treated to a heavyweight tilt between Crosby’s Penguins and Alex Ovechkin’s Washington Capitals. And while the Pens’ 6–2 Game 7 win was an anticlimactic end to the series, the previous six games provided fans with an example of how entertaining hockey can really be at this time of year.

Another entertaining series was predicted for the Western Conference final as the upstart Blackhawks had a date with their Central Division rivals and defending Cup champs, the Detroit Red Wings. But the series has fallen short of expectations so far, with the Wings showing how much experience really matters. The 6–1 blowout in Chicago this past Sunday in Game 4 said it all.

But regardless of the outcome of the series, hockey is experiencing a renaissance in the Windy City.

All of Chicago’s home playoff games have been sold out and the packed houses have lent an atmosphere not seen since back at old Chicago Stadium, especially during the American national anthem.

Chicago sports icon and Super Bowl-winning Bears QB Jim McMahon can attest to how high the decibel level at the United Center can get even though he has played in front of larger crowds.

“The crowd noise in here is a lot more [than at Soldier Field], I think,” McMahon is quoted as saying in an ESPN-Chicago blog post.

“If you can’t get ready to play after the national anthem like this here, you can’t play.”

The Blackhawks’ young guns haven’t been firing on all cylinders in the conference final like they were in previous series. But still, Toews, Kane, Dustin Byfuglien, Andrew Ladd, Cam Barker, and Troy Brouwer are all getting valuable playoff experience.

The team had failed to make the postseason dance the past five seasons and have only made the playoffs twice in the past 11 years. The average age of the team is 25.8 with a number of core players, like Kane and Toews, below the average age.

Still, for all their youthful inexperience, the team was able to knock off the Calgary Flames and the Vancouver Canucks with their talent and determination.

During their maiden playoff campaigns (after the Game 4 loss to Detroit), Jonathan Toews has scored seven goals and six assists in 16 games, while Kane has popped in eight goals and five assists in 15 games.

Rookie of the year candidate Kris Versteeg has 12 points in 16 games and leads the team in power play points with seven.

Standing 6’3” and weighing 250 pounds, converted defenseman Dustin Byfuglien (pronounced “Buff-lin”) is a burgeoning power forward. He has been getting plenty of attention for the havoc he creates in front of top-flight goalies like Calgary’s Miikka Kiprusoff and Vancouver’s Roberto Luongo. Byfuglien has chipped in with nine points in 16 playoff games.

The team also sports a blue-line that is a good mix of new and old with size to boot.

Like Kane and Toews up front, the Blackhawks’ defense features such promising youngsters as 23-year-old Cam Barker and 24-year-old Brent Seabrook. Both stand 6’3” and weigh about 220 pounds.

Seabrook has 11 points in these playoffs with over half coming on the power play. Barker has tallied nine points with five coming on the PP.

If anything, the 2009 Stanley Cup playoffs have proven that the Blackhawks are ahead of schedule and are capable of great things if they maintain their present course. The missing ingredient is stronger goaltending.

Injured Russian Nikolai Khabibulin has been adequate in net but Cristobal Huet had a poor showing in relief last Sunday. Both are not marquee names.

But this is just the beginning for the Chicago Blackhawks. With some judicious personnel management, the makings of a dynasty like the Red Wings could be in the cards.