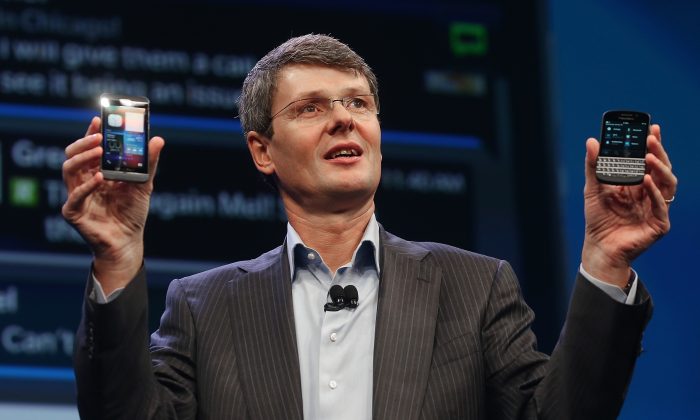 The beaten-down shares of BlackBerry dropped another six percent on Wednesday as investors weighed the likelihood of a highly conditional takeover offer from Fairfax Financial, one of BlackBerry’s largest shareholders.

The smartphone maker pulled back 52 cents to $8.26 on the Toronto Stock Exchange, extending a downwards shift that gained momentum earlier this week.

The last time BlackBerry shares closed this low was on Oct. 31, when it ended at $7.88.
The decline of BlackBerry (TSX:BB) shares has escalated since Monday when Fairfax (TSX:FFH) proposed a tentative agreement to take the company private with a consortium of unnamed financiers for US$9 per share.

The letter of intent values BlackBerry at US$4.7 billion but allows Fairfax to walk away from the offer if it is dissatisfied with a number of conditions.

That tentative bid is gradually becoming a more attractive option as BlackBerry continues to lose value on stock markets. Since the announcement, when shares of the company briefly spiked, its stock has fallen nearly 11 percent.

In New York, the company’s stock lost more than six percent to US$8 on Wednesday.
A report in The Globe and Mail says that Fairfax is seeking more than US$1 billion from other investors to help fund a takeover of BlackBerry.

The Globe, citing unidentified sources, said that as of Tuesday only one pension fund is seriously considering joining the Fairfax-led consortium—the Ontario Teachers’ Pension Plan, one of Canada’s largest institutional investors.

The pension plan has declined to comment on any reports that link it to deals before they’re announced.

The Globe report says Fairfax is pitching a deal that would be financed with $3 billion of bank loans, $1 billion of equity from institutions, and Fairfax’s current 10 percent stake in BlackBerry, worth about $470 million.

Fairfax head Prem Watsa is a former board member of BlackBerry. He stepped down when BlackBerry announced it was considering a sale last month.

As one of Canada’s best-known value investors and Farifax’s billionaire founder, Watsa has been compared to Warren Buffett because of his investing approach. Fairfax has seen a spectacular rise in the value of its assets since 1985.

BlackBerry founder Mike Lazaridis recruited Watsa to join the company’s board in January 2012.

BlackBerry, formerly known as RIM, was once Canada’s most valuable company with a market value of $83 billion in June 2008, but the stock has plummeted from over $140 per share to less than $9.