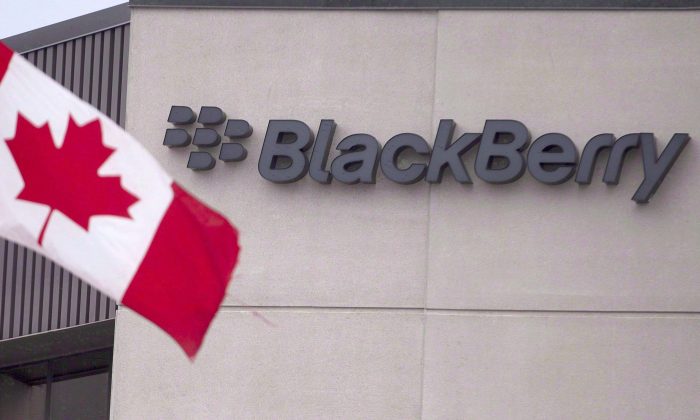 CEO confident strategic shift is working
By The Canadian Press

WATERLOO, Ont.—BlackBerry’s CEO shrugged off a US$117 million third-quarter loss, saying the former smartphone maker turned software firm is no longer in turnaround mode and will grow its software revenue faster than the market next year.

“Everything that we have to do in order to address the the downdraft of the business, we addressed,” John Chen told reporters Tuesday. “Now we need to execute for growth.”

The Waterloo, Ont.-based firm completed a number of significant milestones as part of its strategic transformation to exit the hardware business, he said.

It inked two deals with partners that will design, manufacture, and distribute phones that use BlackBerry’s software in most of the world. A third one is in the works for India, Sri Lanka, and Bangladesh, Chen said.

BlackBerry receives royalties, which could boost its mobility solutions revenue that has struggled amid lacklustre hardware sales.

The company is also trying to position itself in the burgeoning market of self-driving vehicles, and on Dec. 19, it opened a research centre for autonomous cars in Ottawa.

It has also announced a new platform, BlackBerry Secure, that integrates all of the company’s recent acquisitions and intends to help companies reliably manage their current and future connectivity needs, like keeping tabs on all their devices.

Still, the transformation has yet to eliminate BlackBerry’s losses before adjustments.

BlackBerry, which reports in U.S. dollars, says its latest quarterly loss amounted to 22 cents per share. The company had a loss of $89 million or 17 cents per share a year ago.

After adjustments that eliminate some expenses and add some deferred software revenue, BlackBerry says it earned $9 million or two cents per share for the quarter ended Nov. 30.

Revenue was $289 million, down from $548 million a year earlier. With adjustments, revenue for the quarter was $301 million.

The majority of adjusted revenue—about 55 percent—came from BlackBerry’s new focus of software and services, which brought in $164 million, an increase of $8 million from the previous quarter and $10 million from the same quarter last year.

A very significant improvement from where we started the year.
— John Chen, CEO, BlackBerry

It wasn’t enough to offset declines in other areas.

Mobility solutions generated 23 percent of revenue or $70 million—down from $105 million in the previous quarter and from $214 million at the same time last year.

The remaining 22 percent of revenue came from service access fees, which brought in $67 million, down from $91 million last quarter and $173 million at the same time last year. Chen expects the revenue from this category to eventually whittle down to zero.

But he remains confident the company’s new focus will pay off, anticipating 30 percent growth in software and services for BlackBerry’s full financial year that will offset decline in other categories.

BlackBerry raised its adjusted earnings per share expectations for the full year and anticipates profitability by that measure. Before, it expected anywhere from break-even to a five-cent loss.

“This is of course a very significant improvement from where we started the year,” Chen said.

For its next financial year, Chen said the company plans to outperform the market for software growth, coming in slightly above the 10–15 percent growth analysts anticipate overall.

“We believe we can do a little better than that.”