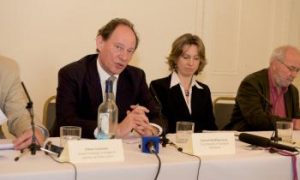 “The PlayBook is expected to begin shipping in the United States in the first calendar of 2011, [with] rollout in other international markets following thereafter,” Ebbs said in the call. The transcript is on SeekingAlpha.com.

However, Ebbs said in RIM’s Q3 earnings conference call that the Canadian consumer electronics company foresees “no PlayBook revenues included in our Q4 guidance and we expect the first revenue impact from PlayBook to be in RIM’s first [fiscal] quarter” which begins in March.

RIM unveiled the BlackBerry PlayBook tablet along with the BlackBerry Tablet OS in September, saying then that it would be available in “early 2011,” according to CNET.com.

Initially, the BlackBerry PlayBook tablet will be Wi-Fi only and have a “fast, powerful dual-core processor and full support for HTML5, JavaScript, WebWorks, Flash, and Adobe AIR,” Jim Balsillie, RIM’s co-CEO, said during the call, adding, “The PlayBook redefines what a tablet should do.”

According to tech blog Engadget, the BlackBerry PlayBook tablet will sport a 7-inch 1024 by 600 resolution multi-touch screen, run a 1GHz processor, have 1GB of RAM, with two cameras (3MP front-facing and 5MP rear-facing with video).

With its “BlackBerry” trademark, RIM is attempting to market the device as a more business-oriented device to the more leisure-oriented iPad, hoping to carve into Apple’s 95 percent share in the tablet market, according to ComputerWorld, which cited a Strategy Analytics report.