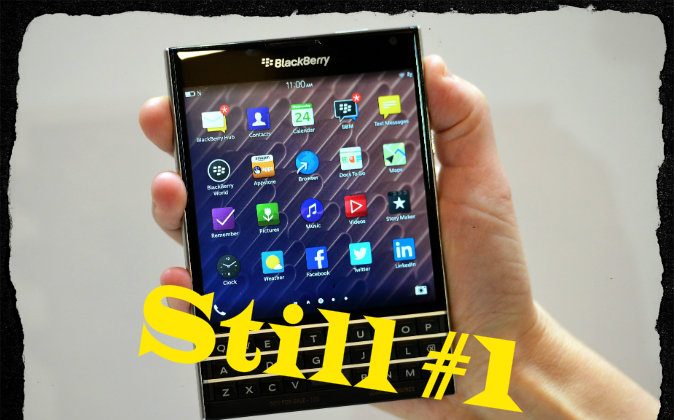 A woman holds the Blackberry Passport smartphone during at a simultaneous launch event in London on Sept. 24, 2014. BlackBerry on Wednesday unveiled its newest smartphone with a full physical keyboard and a large screen, aiming to return to its roots targeting business users. (Carl Court/AFP/Getty Images; effects added by Epoch Times)
Tech

One of the last places that Blackberry has a foothold over Android and Windows Phones is Capitol Hill, which just happens to be a hugely important market for the company's future hopes
By Jeff Sorensen

One of the last places that Blackberry has a foothold over Android and Windows Phones is Capitol Hill, which just happens to be a hugely important market for the company’s future hopes.

According to a poll conducted by The Hill, while around 7 out of 10 lawmakers are packing an iPhone, 28% are still using a Blackberry and 9% are using Android.

What about the amount of lawmakers using a Windows Phone? When you add up the percentages of the others, there doesn’t seem much left. So how low?

This low: One person uses the Windows Phone. One lawmaker out of the 102 surveyed is using a Windows Phone. That lawmaker is Rep. Suzan DelBene (D-Alabama), a former Microsoft employee.

Looking into her background before becoming a representative in Congress, she worked at Microsoft from 1989 to 1998. She was director of marketing and business development for the Interactive Media Group. So you could say that her loyalty for the company hasn’t waned over a decade since her departure from Microsoft into politics.

To be fair, her use of the Windows Phone is also shared with her staffers who use them as well.

Sure, it’s amusing that such a high level of lawmakers use a Blackberry, and only one uses a Windows Phone, but it gets worse: Reps. Howard Coble (R-N.C.) and Ed Pastor (D-Ariz.) — do not use a cellphone for work at all. Instead, they get their messages from staffers or pick up a landline to make calls.