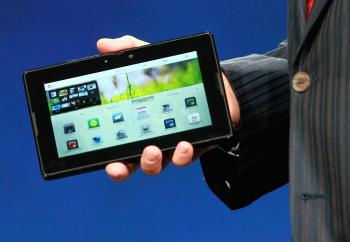 The price for the BlackBerry PlayBook has not been announced yet, but it operates via connecting to a nearby BlackBerry smartphone, has BlackBerry software running in the background, and is Wi-Fi enabled. Although BlackBerrys once had a dominating market share in the smartphone market, in recent years it has been trumped by flashier hardware from Apple, particularly with the entrance of Apple’s iPhone and its applications and screen size.

“RIM needs a tablet device because it’s necessary for all the device makers to have a multiplatform strategy to compete in the long term,” said Scott Sutherland, an analyst at Wedbush Securities Inc. in Los Angeles, according to a Bloomberg report. “With new devices coming out on multiple operating systems, it’s as much defensive for RIM to have a tablet as it is offensive.”

BlackBerry’s obvious attempt to gain more market share in the U.S. market with the new device—with a 7-inch screen—differentiates itself from the iPad in terms of its size and attempts to be place itself between a smartphone and laptop.

The smaller screen allows a little more portability than an iPad, which has a 10-inch screen, making it easier to carry.

Jim Balsille, RIM’s co-chief executive officer outlines key points of difference between its product compared to others. The original security features, which made the BlackBerry a stand out product for governments and leading businesses has been maintained, which gives the product a definitive competitive edge for corporate users. The incompatibility of Apple Inc. and Adobe’s Systems Inc.’s Flash technology is not an issue for the RIM tablet whereby users will be able to use the Internet and still watch a broad range of video content on the PlayBook.

The PlayBook aims to generate more revenue for BlackBerry. RIM’s presence in the smartphone market has dropped to 18.2 percent in the second quarter from 19 percent a year earlier. Apple’s iPhone increased its share to 14.2 percent from 13 percent and smartphones using Google Inc.’s Android software platform leaped to 17.2 percent , according to market researcher IDC.