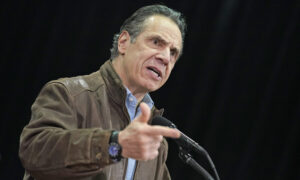 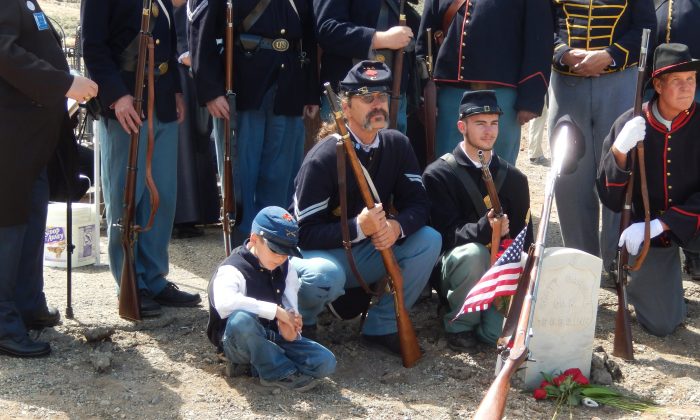 Civil War re-enactors gather Sunday, June 7, 2015, around the grave of Pvt. Scott Carnal of the 1st Kansas Colored Infantry during a ceremony Sunday in Dayton, Nev., 30 miles south of Reno. (Lynne Ballatore/Historical Society of Dayton Valley, via AP)
US

RENO, Nev.—A runaway slave who joined the Union Army during the Civil War and lost a leg after being wounded in battle finally received recognition Sunday, nearly 100 years after he died in Nevada.

Nevada historians say they decided to hold a military funeral for Pvt. Scott Carnal of the 1st Kansas Colored Infantry because it’s unlikely he received any recognition after his death in 1917 in Dayton, about 40 miles south of Reno.

Carnal was long forgotten until modern researchers discovered that he belonged to the United States Colored Troops and was severely wounded in the Battle of Honey Springs in what is now Oklahoma on July 17, 1863. He was roughly 73 when he died, and no obituary on him has surfaced.

Over 200 people, many of them wearing Civil War-era attire, paid tribute to Carnal and other unsung veterans at the Dayton Cemetery during the ceremony staged by the Sons of Union Veterans of the Civil War, the Historical Society of Dayton Valley and several other groups. Firing squads and a bugler stood to offer three-volley salutes and play taps. A riderless horse led by a man circled Carnal’s grave.

John Riggs of the Sons of Union Veterans said Carnal was a hero for putting his life on the line to preserve the Union and abolish slavery. The Virginia-born Carnal joined the Union Army in Kansas in March 1863, shortly after running away from his slave master in Missouri. He was about 19 at the time.

“Can you imagine being a slave out on some plantation and seeing the Civil War going on and you say, ‘Well, I need to be part of that?'” Riggs said. “For somebody that young to volunteer to go out in the field to fight and then get shot in combat, he had to be a hero. He did his duty as a volunteer for freedom.”

Christopher Price, director of the Honey Springs Battlefield, said Carnal’s brigade played a major role in the battle, which was a turning point for the Union in the campaign west of the Mississippi River. The soldiers who fought it were mostly of African-American and American-Indian ancestry.

The United States Colored Troops made up over 10 percent of the Union Army, while only 1 percent of the North’s population was black, according to the African American Civil War Memorial and Museum in Washington, D.C. After President Abraham Lincoln’s Emancipation Proclamation took effect on Jan. 1, 1863, the War Department publicly authorized the recruiting of blacks.

“Without the military help of the black freedmen, the war against the South could not have been won,” Lincoln said.

After Carnal was hit in the thigh by a musket ball at the Battle of Honey Springs, his wound festered until doctors amputated his leg nine years later, according to his military records. His physical struggles continued, and he eventually was awarded a military pension by the government.

He married after the Civil War and had a daughter. He later headed west to mine gold and silver in Colorado and Nevada. A likely grandson, Anatole Cornell, died in New York City’s Harlem neighborhood in 2007, and no descendants have turned up so far.

Linda Clements, president of the Historical Society of Dayton Valley, said she’s baffled how Carnal ended up in Dayton. She will serve as his “surrogate mother” and tend his grave until any descendants or other family can be found, she said.

“For now Scott is my adoptive ancestor … I am fascinated by his story and I hope somehow in the great equalizer of death he’s found the comfort that was so often denied him in life,” she wrote by email.