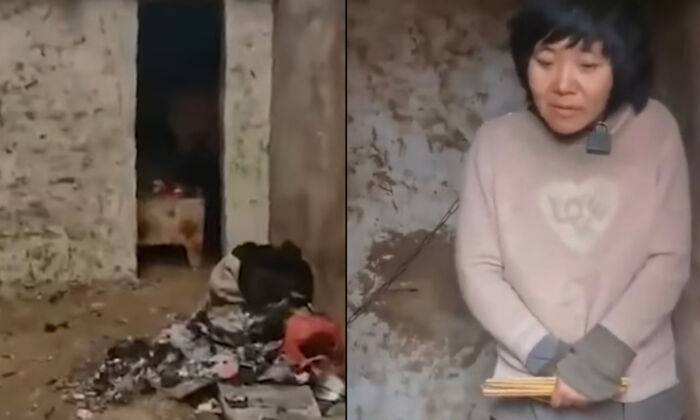 Photo of a mother of eight (R) found shackled in a village hut in Xuzhou city, Jiangsu, China, in January 2022. (Douyin/Screenshot via The Epoch Times)
China Human Rights

After publishing a 5000-character communique on social media on Feb. 23, China Central Television (CCTV), the regime’s state broadcaster, met unrelenting waves of online condemnation for its response to reports of a mother of eight shackled in a hut in the Feng County of Xuzhou City, Jiangsu Province.

Despite the statement’s censure of local officials in Feng County, it echoed previous reports made by the Xuzhou city government de facto, leaving unresolved the fundamental contradictions raised by members of the public.

In the week preceding the start of the 2022 Winter Olympics, a video showing an apparent victim of human trafficking chained up in a hut went viral on the Chinese internet. After days of inaction from the regime and a series of loophole-filled official statements, now-censored demands for accountability flooded the newsfeed of Chinese netizens.

As of Feb. 22, the topic had been viewed more than 4.8 billion times on Weibo.

By Feb. 23, the Chinese regime officials had issued a total of five notices. The authorities’ level of involvement roughly followed the escalating public outcry.

The first and second notices, issued by Feng County days after the video was posted in late January, denied speculations that the case involved human trafficking. The notices’ preemptive claims set off days of vehement criticism alleging county cover-up and negligence.

On Feb. 7, the level-higher Xuzhou City government launched a probe and in a third notice identified the woman as Xiaohuamei, who reportedly went missing after traveling to Jiangsu in hopes of finding a cure for an unspecified disease.

The public found an issue with this statement. Several bloggers on Weibo posted a picture of Li Ying, a girl from the neighboring Sichuan province, who was reported missing in 1996, and found her facial features to resemble those of the  chained woman in Xuzhou.

A Chinese film producer from Fengxian County, said in a Weibo post that the chained mother is Li Ying and all the locals know this fact. He added that because Li’s father is in the military, the regime avoided associating the victim with a missing girl for fear of alienating the military.

The city’s report claimed she was from the province of Yunnan, on the Southwestern border of China, which was another point of contention among netizens as she would have traveled over 2,000 kilometers to get to Jiangsu Province.

In a Feb. 10 notice, fourth of the five notes, the Jiangsu province recognized the case as human trafficking, contradicting earlier information issued by local Feng County authorities. Many said the county had protected its image over providing expedited help to the victim, or identifying her origin and returning her to her original home.

The CCTV’s Feb. 23 communique reaffirmed the woman’s identity as Xiaohuamei, referring to interviews and DNA tests obtained by investigators from Feb. 17 to Feb. 22. The communique also rejected earlier speculation that the woman was Li Ying.

The communique attributed the differences between the woman’s current appearance and the marriage certificate photo to factors such as “skin deterioration, hair deterioration, fat liquefaction, and lack of teeth.”

In addition, the communique said Xiaohuamei was born in 1977 contradicting what was on the marriage certificate. It said Dong had registered a different age than the woman’s actual age at the marriage registry without elaborating further.

Sixteen Feng County officials and one vice-chair at the Xuzhou city-level Women’s Federation received varying degrees of punishment from demotion to expulsion from the Communist Party. The statement said that three of the seventeen officials were temporarily detained and await a disciplinary ruling.

“This is China’s first ‘Black Swan Incident’ of 2022,” China expert Wen Zhao said during his Feb. 21 show, “it had evolved into an unstoppable eruption of a societal-wide outage with the participation  of grassroots and elites, and entrepreneurs and students.”

Wen cited a Henan author who called for the dissolution of the so-called “Women’s Federations” in China, which were silent throughout the incident.

Women’s Federations in China are part of 22 “mass organizations” that bear a resemblance to the Western ideas of civil societies on the surface. In reality, the Secretariat of the Chinese Communist Party directly manages the mass organizations and recognizes them to be a part of the peripheral organizations.

“CCP members under Xi’s rule are generally lackluster in their duties. Without a directive from the top, they would not know how to handle a situation,” Chen Weijian, publisher of Beijing’s Spring, told the Epoch Times.

“The Jiangsu incident [of the chained mother] should have been apparent, even without investigation. They all knew. The CCP’s intelligence system and public security system are well aware of things like this,” Chen said, “their main concern is how to minimize the incident’s impact to the Party.”

“In a normal liberal democratic country, the protection of women’s rights are not only dependent on human rights groups and women’s rights groups. The more important factor is judicial independence, freedom of the press, and checks by the opposition [political] party,” Professor Year-tarn Lee at the National Chengchi University told the Epoch Times.

Professor Lee said the judicial system should serve to protect the people instead of being a political tool, and “all of its mechanisms are for the protection of human rights. Yet, all mechanisms of the CCP exist for the sole purpose of protecting the safety of the communist party regime.”

“Therefore, this issue is an issue of the political system’s structure: absolute power and absolute corruption,” Lee added.

Ning Haizhong, Luo Ya contributed to this article