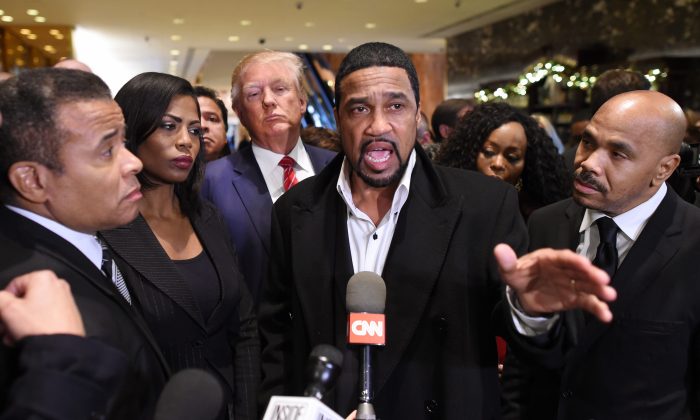 Donald Trump has received an endorsement from one black pastor, but another black pastor stepped forward and lambasted anyone who supports the Republican presidential candidate.

Darrell Scott, who said he organized the meeting, called it historic.

“We made history today because we had meaningful dialogue with Donald Trump, and we voiced concerns that are sensitive to the African-American community,” he said, reported the Daily Caller.

“We asked questions were answered and we were satisfied with the answers and we’re a unified front right here. We had a wonderful time, a wonderful dialogue, wonderful fellowship, wonderful interaction. It was a great day.”

The meeting was initially planned for 100 black pastors and Trump, but was rearranged after some controversy surrounding whether it was an official endorsement from all the pastors that would have been involved.

Some pastors who pulled out wrote an open letter on the Ebony Magazine website criticizing some comments Trump has said while campaigning.

The meeting at Trump Tower eventually took place but was not an official “endorsement.”

Scott says he’s already supportive of Trump and took the blame for the controversy, attributing it to “miscommunication on my part.”

Trump said he and the pastors who did attend, around 40 in the end, discussed a range of issues such as the spate of police shootings of African-Americans and the high unemployment rate among black youths. But what they really want, Trump said, is firm and effective leadership.

“What they really want more than anything else is results. They want results in the form of jobs,” Trump said, reported the New York Times.

Scott noted that while he’s endorsing Trump, other pastors were meeting him for the first time.

“They want to hear his voice, they are going to pray to God about it as ministers do. But nobody in this meeting came out with a negative reaction in any kind of way. Everybody came out positive. It’s a great atmosphere and spirit in the room. And everybody in that room likes Donald Trump.”

Bishop George Bloomer of Durham, North Carolina said it’s too early to endorse Trump. He came to the meeting to call Trump on the racial slurs and so forth, and also the Black Lives Matter protester recently getting tossed from a Trump event.

“We expressed to Mr. Trump, that in order to win people in our congregations . . . you’re going to have to change the rhetoric and tone down the things that you say that seem demeaning to people,” added Bishop Orrin Pullings Sr. of Virginia to MSNBC.

Pastor James Davis, another pastor who attended, said he is supporting Trump.

But Jamal Harrison Bryant, a Baltimore pastor who did not attend the meeting, told Davis on CNN that he and the ministers who met with Trump are being used, calling Davis a “pawn.” Bryant called them “prostitutes.”

“I want to apologize, because prostitutes get money. And the 100 that went in there walked away with nothing, they did it for free,” he said.

“So there’s another word for that, and I would not use that language on a family channel.”