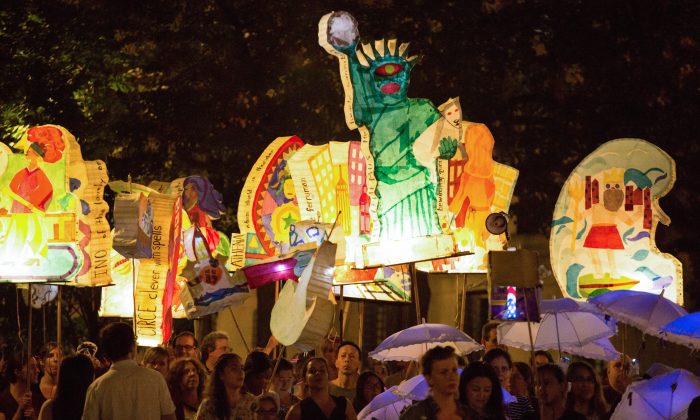 NEW YORK—Illuminated images of Athena, Poseidon, and the Statue of Liberty floated through Morningside Park about an hour after dark as nearly a thousand people filtered in and out, taking part in a glowing, musical procession at every turn.

“This feels magical,” two onlookers said, accepting glow sticks from participants of the procession before joining in the long line of people—residents of Morningside, Harlem, Columbia University students and faculty, and people from as far as Brooklyn who came on a whim.

For the third consecutive year, Morningside Park was lit after dark with large, dreamy lanterns—each one a collaborative effort in communal composition.

As summer and September come to an end, the Friends of Morningside Park hold a Common Ground festival every year, drawing families from the area with activities for children like face painting, pony rides, and arts and crafts.

The illuminated procession, Morningside Lights, is the centerpiece of the festival.

Romare Bearden (1911–1988) moved to Harlem from North Carolina as a child with his family, during the Great Migration of African-Americans. The journey from his inhospitable home in the South gave inspiration to a series of 20 collages titled “Black Odyssey,” based on Homer’s epic, “The Odyssey.”

The collages are now part of a Smithsonian Institution traveling exhibition that will come home to be displayed at Columbia University in November. The university is holding a yearlong celebration, integrating the exhibit into its curriculum.

Thus, Bearden’s work was chosen for the theme of Morningside Lights this year. For one week leading up to the procession, children and adults mirrored his collage techniques, creating giant lanterns in the theme of “The Odyssey,” relating the Homeric archetypes to their own home and experiences.

“This is Athena as a school teacher,” said Danielle Tully, owner of Harlem bike shop MODSquad Cycles, Friday afternoon at Miller Theater. “She, my daughter, designed Athena in her own image, with the Afro,” Tully said.

The day before the procession, Tully was working on finishing a lantern her two children had designed days before. They were familiar with Homer’s epic, and the children thought Athena was much like a schoolteacher, guiding Odysseus through his journey.

The art workshops are broken into sessions that allow anyone to come in and contribute however much time they wish. Some come for half an hour to work on bits of lanterns here and there, and others attend the workshops every day.

One set of people designs the concepts for the lanterns, another creates the to-scale drawing, the next group crafts the lantern structure, and yet another group creates a collage of the scenes described beforehand, matching them onto the lantern. Each group leaves a roadmap of instructions for community members who will pick up on the work the next day.

Tully’s children had attended a few of the workshops days before. “It was amazing,” she said. “My kids (11 and 8) were cutting with X-ACTO knives and doing the papier-mâché part … and you really have to be precise with it.”

“This part is fun because you have an idea of what you want it to look like and you’re working with paper and glue, which is slightly unforgiving,” Tully said of the collage. “There’s a serendipity to it.”

Last year, Tully had been out of the country during the week of workshops, but remembered seeing the lights that last Saturday. She had finished work, it was dark, and she headed over to see the procession that was already underway. Tully expected to see handmade lanterns and families, but not the long line of bioluminescent sea creatures that emerged from the park, floating and ethereal.

“I was just sort of stunned, and shocked, and enchanted,” Tully said. “And this year, I made a point to be part of it.”

Almost more surprising was the sense of community built, both within Columbia’s Miller Theater and beyond it.

“The other day,” Tully recalled, “my kids and I were on the street and we saw a boy and his mother who had been here on the first day with us, and we had never seen them before.”

“And my kids were like, ‘he was with us!'” Tully said. “That was really nice, and I think that was part of what they were trying to do.”

Morningside Lights, the brainchild of Processional Arts Workshop artists Alex Kahn and Sophia Michahelles, was created to bridge the gap between Columbia University and its neighboring communities through a large scale, carnivalesque procession, crafted by the hands of the community members themselves.

The creation is partnered with Columbia’s Miller Theater, which focuses on unique musical programming.

“The turnout has been really surprising,” said Melissa Smey, executive director of the Arts Initiative and Miller Theatre at Columbia University.

“We had no idea what to expect so we tentatively estimated a hundred people [the first year],” Smey said. Ultimately, nearly 700 people joined in the first Morningside Lights procession.

“It’s a procession, not a parade,” Smey explains, and people will come to watch and find themselves participating, joining the procession through the park and back to campus. From the collaborative crafting to the procession, it’s all communal.

Close to 500 people in total participated in the workshops over the course of the week.

“It’s about communal ownership of the process and the finished product,” Smey said. “It’s a beautiful, communal, participatory project.”