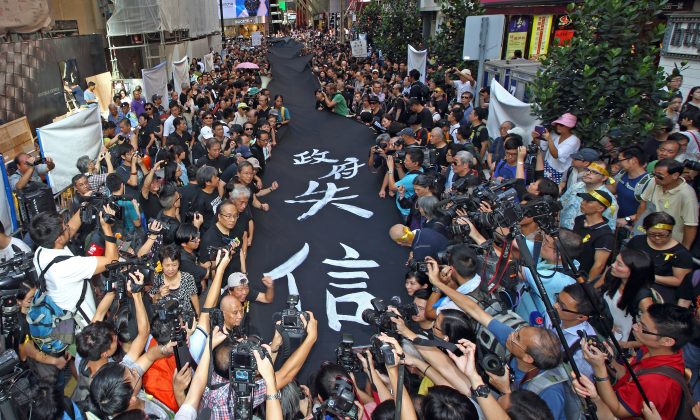 HONG KONG—On Sunday 4,000 individuals wearing black shirts with yellow ribbons on the chest marched in what was billed by organizers as a “Black-Cloth March.”

The march was held to support the Occupy Central civil disobedience movement. The black, according to Occupy Central organizer Benny Tai, “represents our indignation.” The yellow ribbons represent the Hong Kong people’s demand for universal suffrage.

Several students carried a large black banner on which was written, “students’ strike.” Students from 17 Hong Kong colleges and universities are scheduled to go on strike for a week on Sept. 22 to support demands for universal suffrage.

The protesters included Occupy Central organizers, democratic politicians, various civil groups, students, and Hong Kong citizens. They formed a long and dignified procession that was quiet—no slogans were yelled—save for the deep, rhythmic pounding of the drummers who brought up the rear.

Starting at 3:30 p.m., the protesters wended their way from Causeway Bay to Charter Road in central Hong Kong, walking for about 3 hours. At their destination they held a rally calling for more Hong Kong citizens to join the democratic movement.

A statement posted last week on the Black-Cloth March Facebook page says the demonstration was held to “tell the world how the Hong Kong people have been betrayed.”

“Thirty years ago, the Chinese Central Government promised Hong Kong ‘one country, two systems’ and a ‘high degree of autonomy’,” the statement says.

The statement continues, “Those promises have never been fulfilled and democracy in Hong Kong is stifled. Students in those days have their hair turned grey already while students today are going on strike and united in their fight for democracy.”

The statement and march, and the Occupy Central movement, are a response to an Aug. 31 decision by the National People’s Congress (NPC), the Chinese Communist Party’s rubber stamp legislature. The Congress rejected calls for open elections for Hong Kong’s next chief executive, choosing a form of indirect election that assures Beijing controls who the candidates will be.

“The NPC’s decision shows that the central government broke its promise of giving democracy to the Hong Kong people,” said Benny Tai at the rally.

At the end of the march, the organizers, by passing the black cloth banners to the students who took part, showed their support for the upcoming student strike.

“The Communist Party has used autocracy to manage Hong Kong. People with conscience should all stand up,” said Alan Leong, leader of the Civic Party, at the rally.

76 year-old Martin Lee, the founding chairman of the Democratic Party in Hong Kong, said, “We must protect our Cantonese language, our traditional Chinese characters, our civil society, our spirit of the rule of law, and we must persist in defending our freedom from being exploited.”

Benny Tai told the Hong Kong press last week that a similar parade will be hosted every Sunday until the Occupy Central action takes place. The marches are calling for more Hong Kong people to participate, Tai said. An anonymous source has said Occupy Central is expected to take place sometime in October.

With reporting by Lin Yi.