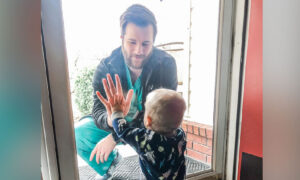 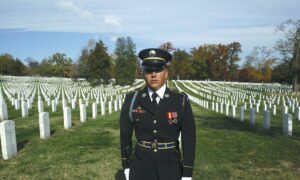 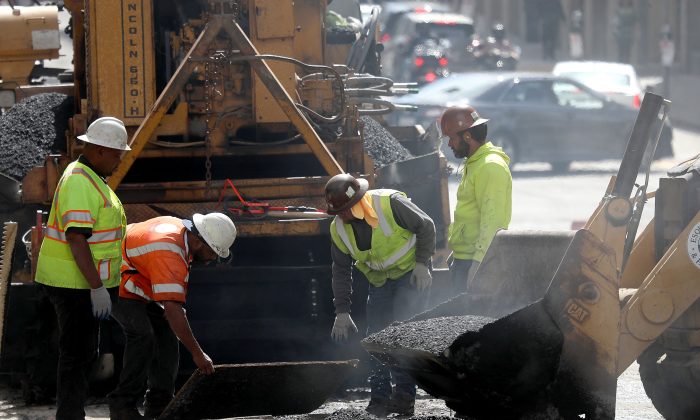 Construction workers smooth tar as they pave a road in San Francisco, Calif., on Oct. 5, 2018. (Justin Sullivan/Getty Images)
US News

Black American men are experiencing their lowest unemployment rate on record at 6.3 percent, according to the Bureau of Labor Statistics (BLS).

When women are included in the November count, unemployment among black Americans fell to 5.9 percent, which equaled the record low reached in May.

Among black men in particular, labor-force participation has dropped to 63.8 percent—the lowest since January—signaling that at least part of the low unemployment was due to people leaving the workforce, such as by retiring or ending their job search.

“This is still a solid gain that suggests economic growth is gradually slowing back towards its potential pace,” said Paul Ashworth, chief economist at Capital Economics in Toronto. “There is nothing here to suggest the economy is suffering a more sudden downturn.”

An unusually cold November slowed hiring at construction sites, with payrolls increasing by only 5,000 jobs after surging 24,000 in October. Manufacturing employment increased by 27,000 jobs last month after rising 26,000 in October.

The booming job market may lead to pay increases as employers try to keep valuable workers. Such pay growth, however, poses a risk of stoking inflation because employers may project their payroll costs into their prices.

Average hourly pay increased 3.1 percent from a year ago in private non-farm jobs. Yet inflation held at 2 percent, excluding the volatile energy and food prices. The reason appears to be increased investments into productivity, making businesses produce more with the same labor.

Labor productivity grew at 2.3 percent in the third quarter in private non-farm jobs, signaling wage hikes haven’t been just a result of a tight job market, but real improvements in the economy.

Federal Reserve Chairman Jerome Powell last month appeared to signal the central bank’s three-year tightening cycle was drawing to a close, saying its policy rate was now “just below” the range of policymakers’ estimates of a level that neither cools nor boosts a healthy economy.

Minutes of the Fed’s November policy meeting published last week showed that nearly all officials agreed another rate increase was “likely to be warranted fairly soon,” but also opened debate on when to pause further hikes.

“The outlook for 2019 is uncertain in the face of the volatility in the financial markets and the weak inflation,” said Sung Won Sohn, chief economist at SS Economics in Los Angeles. “If the slowdown in employment gains continues, the Fed will pause for a while to get a better fix on the economy.”