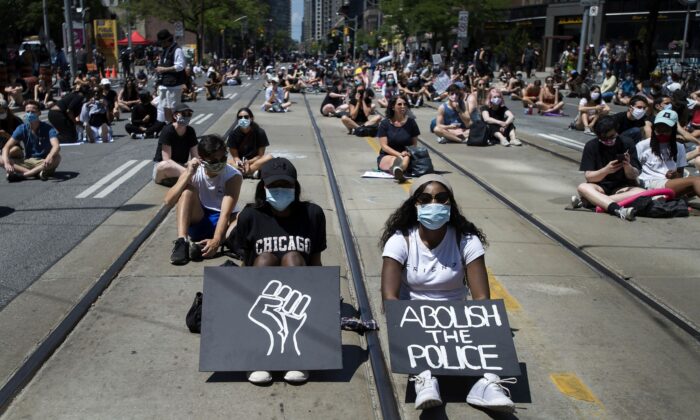 Thousands of people take part in a demonstration to defund the police in support of Black Lives Matter in Toronto, Canada, on June 19, 2020. (The Canadian Press/Nathan Denette)
US News

Infighting among Black Lives Matter groups appears to be increasing after a coalition of Black Lives Matter chapters demanded transparency from the group’s global network amid reports that co-founder Patrisse Cullors spent millions of dollars on homes and real estate.

Cullors, a self-described “trained Marxist,” stepped down from the group last month, but denied allegations that she misused any donations and said those claims—along with reports about her real estate holdings—were part of a right-wing misinformation campaign meant to discredit her and Black Lives Matter.

But a group calling itself BLM 10 Plus, the name of the 10 original Black Lives Matter signatories, said that it wants answers from the BLM Global Network, Cullors, and others about how donations were spent, alleging the leftist organization’s leadership hasn’t been transparent with the other groups.

“The number of chapters that have aligned in support of our statement has nearly doubled. Some of these chapters have made their own statements echoing not only our call to accountability, but also our experiences as we sought transparency, democracy, and internal transformation for years,” BLM 10 Plus said in a statement dated June 11.

Claiming that some “grassroots” activist groups “have been co-opted across the world,” BLM 10 Plus’s statement said it’s demanding “transparency and most importantly, for principled accountability, in movement infrastructures.”

Cullors’s and other Black Lives Matter Global Network senior staff members’ salaries “have never been reported” to the individual chapters, BLM 10 Plus stated. They have also alleged that Cullors “installed herself as the executive director” of the foundation, which “immediately fractured the network” and led to the creation of BLM 10 Plus.

Among those who have signed onto BLM 10 Plus’s statement is Michael Brown Sr., the father of 18-year-old Michael Brown, a black man who was killed during an officer-involved encounter in Ferguson, Missouri, in 2014—which triggered lengthy, widespread riots in the St. Louis suburb.

“They are benefiting off the blood of our loved ones, and they won’t even talk to us,” Samaria Rice, the mother Tamir, told the New York Post. “I don’t believe [Cullors] is going anywhere. It’s all a facade. She’s only saying that to get the heat off her right now.”

Tamika Palmer, the mother of Taylor, wrote in a now-deleted Facebook post that the Black Lives Matter chapter in Louisville, Kentucky, allegedly “raise[d] money on behalf of Breonna’s family who has never done a damn thing for us nor have we needed it or asked so talk about fraud.”

“It’s amazing how many people have lost focus,” she wrote.

On May 27, Cullors said she would step down as Black Lives Matters’ executive director and stated she would focus on TV and other projects, including a multi-year deal with Warner Bros. It came at what some have described as a precipitous time for her following a New York Post report in April that detailed how she had purchased several “high-end homes worth $3.2 million,” including one in a Southern California resort that includes homes owned by singer Justin Timberlake and golfer Tiger Woods.

Cullors noted in the interview that she has a child and a brother with mental illness that she needs to support, although she didn’t explain her alleged real estate holdings.

“The way that I live my life is a direct support to black people including my black family members first and foremost,” she said, noting that “many black folks” invest in “their family.”

BLM’s Global Network didn’t respond to a request for comment by press time.