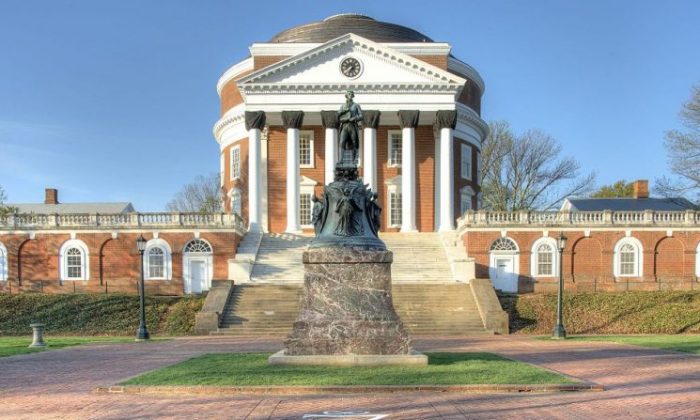 Statue of Thomas Jefferson at the University of Virginia. (By Bestbudbrian (Own work) [CC BY-SA 3.0 (http://creativecommons.org/licenses/by-sa/3.0)], via Wikimedia Commons)
US

People carrying Black Lives Matter signs draped a black tarp over the statue of Thomas Jefferson at the University of Virginia on Tuesday and placed placards that read “racist” and “rapist” on the monument honoring the founding father and former president.

More than 100 people gathered around the statue to protest the university’s refusal to fulfill several demands made by the Black Student Alliance, according to the Daily Progress. The Alliance demanded that the university enroll more black students and hire more black professors.

The protestors targeted the statue of Jefferson because they say it is “an emblem of white supremacy.” Jefferson, the founder of the University of Virginia, owned slaves but worked to end slavery.

The Black Student Alliance also demanded that the university require all students to study “white supremacy.”

“With every new horror that arises each month, each day, there has been an unparalleled resistance of people who say no to white supremacy, no to fascism, no to all forms of oppression,” said one of the speakers.

“And we recognize and honor the fact that this resistance was not born ten months ago, but has actually lived for many years: communities of color in Charlottesville fighting for affordable housing, for a living wage, for an end to police brutality and state-sanctioned violence, for education for all,” the speaker added.

The University of Virginia is located in Charlottesville, Va., the city where heated clashes occurred last month that turned deadly when a car was rammed into a crowd of protesters, killing one.

The clashes centered around the removal of a statue of Confederate General Robert E. Lee. Members of various conservative and white supremacy groups who were protesting the statue’s removal clashed with members of Black Lives Matter and far-left extremist group Antifa, who turned up to counterprotest.

University of Virginia President Teresa A. Sullivan said on Wednesday morning that she “strongly disagrees with the protesters’ decision to cover the Jefferson statue.”

“I also recognize the rights of those present at the protest to express their emotions and opinions regarding the recent horrific events that occurred on our Grounds and in Charlottesville,” Sullivan said. “Our community continues to heal, and we must remain respectful of one another if substantive progress can be made on addressing the many challenges and opportunities that we all face.”

Sullivan added in an email to Daily Progress that “… as part of this demonstration, they shrouded the Jefferson statue, desecrating ground that many of us consider sacred.”

The protest has cleared, but the shroud on the Thomas Jefferson statue at the Rotunda remains. pic.twitter.com/BqYtCEtH5q