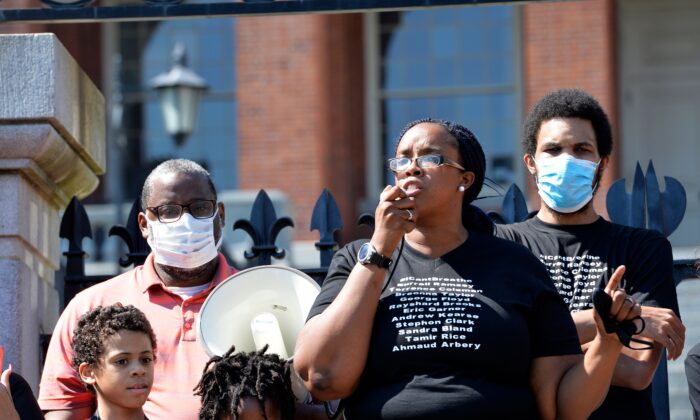 A Black Lives Matter activist in Boston and her husband have been charged with fraud and conspiracy by federal officials after allegedly taking money meant for a nonprofit they founded to pay for hotel rooms, car rentals, and dining out.

Monica Cannon-Grant, 41, and her husband Clark Grant, 38, were charged in an 18-count indictment this week by the U.S. Attorney’s Office for the District of Massachusetts.

The couple used tens of thousands of dollars meant for charitable efforts such as feeding needy children to pay for a vacation to Columbia, Maryland; groceries; Uber rides; car rentals; meals at restaurants; gas; auto insurance; purchases from retailers such as Old Navy; nail salons; hotel rooms; parking fees; and Walmart purchases, according to charging documents obtained by The Epoch Times.

The funds were donated to the organization founded by Cannon-Grant and Grant, called Violence in Boston (VIB). Among those donating funds were a Cambridge Black Lives Matter group and a department store, prosecutors say.

One $10,000 donation came from the Suffolk County District Attorney’s Office, which was headed at the time by Rachael Rollins, the current U.S. attorney for Massachusetts.

Additionally, Cannon-Grant and Grant are alleged to have knowingly made a false statement and report to obtain a mortgage loan by omitting income from their nonprofit.

Cannon-Grant has described herself as a Black Lives Matter activist. The nonprofit she started with her husband says its mission is “to improve the quality of life and life outcomes of individuals from underserved communities by reducing the prevalence of violence and the impact of associated trauma while addressing social injustices through advocacy and direct services.” It often promotes posts with Black Lives Matter hashtags on social media.

Grant was working at an unnamed company from 2018 through 2021, starting as a laborer and eventually being promoted to track foreman, according to information reported on his tax returns.

Cannon-Grant appeared in court on March 15 and is scheduled to appear again for arraignment next week. She declined to speak to reporters outside the courtroom.

“We are extremely disappointed the government rushed to judgment here,” Robert Goldstein, an attorney representing the activist, told The Epoch Times in an email. “VIB and Monica have been fully cooperating and their production of records remains ongoing. Drawing conclusions from an incomplete factual record does not represent the fair and fully informed process a citizen deserves from its government, especially someone like Monica who has worked tirelessly on behalf of her community.

“We remain fully confident Monica will be vindicated when a complete factual record emerges.”

Cannon’s arraignment has not been scheduled. He was arrested last year but is not being held.

The Violence in Boston organization and the public defender representing Cannon didn’t respond by press time to requests for comment.

The nonprofit shared posts on Twitter claiming the idea that Cannon-Grant started it “to enrich herself just doesn’t make sense.”

“Even if she pocketed all the money the org brought it, she would not be wealthy enough to make up for the constant harassment and threats. A fraud would find an easier way to make money,” one of the posts alleged, from a group called Waltham’s Night’s Watch, which didn’t list a source.