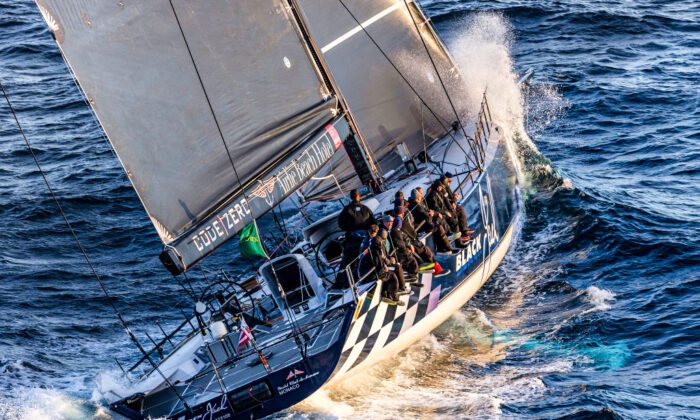 Black Jack has won line honours in the Rolex Sydney to Hobart Yacht Race early Wednesday morning after howling southerly winds and heavy seas thinned out the fleet early in the race.

The 100-foot supermaxi crossed the finish line on Hobart’s Derwent River at 1.37 a.m. in a time of 2 days 12 hours 37 minutes 17 seconds, the official race website reported.

The win involved a tight tussle with two other 100 footers, LawConnect and SHK Scallywag, and even up until late on Tuesday evening it was uncertain which of the three would triumph.

Black Jack was the favourite to take out the race when lighter conditions prevailed near the end of the race, and when she began the final 11 nautical mile stretch up the Derwent River in first place, she was able to maintain a speed of 6 knots to claim victory.

This comes after a gruelling first night of strong southerly winds and rough seas took its toll on the field, forcing 24 boats to retire by the next morning.

Among the first forced to withdraw on Sunday was 69 Moneypenny, due to a broken forestay; Blink, one of seven Beneteau 40s in the race, with a torn main; and Mako, a Sydney 40, with a damaged main.

Adrienne Cahalan, navigator of the Hoek TC78, Oroton Drumfire, and racing in her 29th Sydney to Hobart, said on Monday morning that as part of a crew of 16, she really felt for those around her, especially crews in the Two-Handed Division.

“I just can’t imagine how tough it would have been that first night to have only two people dealing with all the different issues that arise,” she said.

“So many things happen when you get a big storm like that.”

She said the first night had been furious, with a lot of boats, including her own, needing to protect their equipment and everything on board.

“Fortunately, yesterday [27th], the wind moderated to sort of 20 knots from the south-east; but mostly south to south-east,” she said.

Black Jack’s victory was sweet after she had come close previously in 2018 and 2017, with second and third place finishes respectively.

This was the first time Black Jack’s owner Peter Harburg hadn’t been onboard in a Sydney to Hobart race since purchasing the vessel in 2017. He instead opted to watch the race on the ground via live tracker.

An emotional Harburg said, “We’ve beaten every other yacht on the coast of Australia at different times in different races.”

“This is the prize that has eluded us all along and to get it is the complete set.”

Skipper Mark Bradford said the win came down to the team. Harburg elaborated, saying “The effort they put in. On paper, LawConnect should have been faster upwind [on day one]. To hold them and then pass them and to be down here.”

“These guys have just sailed so well. We’ve got a good boat too,” he said.

Bradford also praised Harburg for his commitment to the Black Jack project.