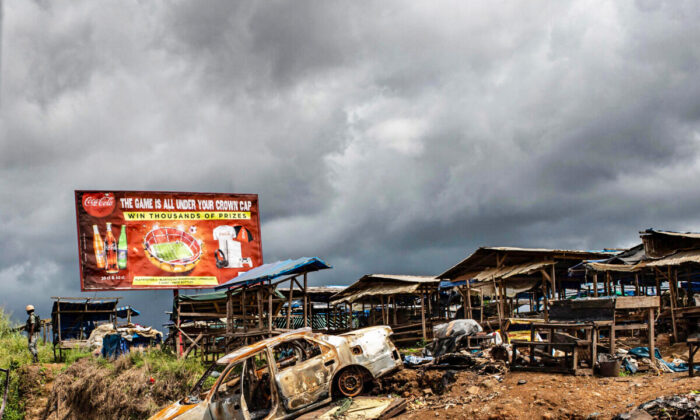 The wreckage of burnt out car is pictured, allegedly destroyed by separatists fighter in a recent attack, as a Cameroonian soldier (L) patrols the edge of the abandoned market in the majority anglophone South West province in Buea, on October 3, 2018. (Photo by MARCO LONGARI / AFP) (Photo credit should read MARCO LONGARI/AFP via Getty Images)
World

The protracted civil war between Cameroon’s army and Anglophone militants fighting for a breakaway state produced a new wave of violence in recent months.

Both the Cameroon military and Anglophone separatist fighters accuse each other of the attack.

Rights groups, however, point accusing fingers at the rebels.

“This attack was undoubtedly committed by a non-state armed group in the area,” Billy Burton, co-director of Cameroon Anglophone Crisis Database of Atrocities told The Epoch Times in a text.

Burton said that in February, a non-state armed group also targeted Queen of the Rosary College in Okoyong, only a few miles from Mamfe.

“Regrettably, the Mamfe area has therefore been the site of two of the most significant breaches of international law in the conflict in recent months.”

“Fundamentally, the attack shows that the civilian population—85,000 of whom relied on that hospital—are not adequately protected by international humanitarian law in this conflict, and that certain armed actors will continue to target critical civilian infrastructure to achieve their political goals.”

The end result, Burton said, “A city without a hospital, a generation of children without a school.”

He said such acts prove beyond reasonable doubt that the Anglophone crisis has created a “near-total vacuum or black hole for human rights” thereby worsening the suffering of civilians.

The UN Office for the Coordination of Humanitarian Affairs also blamed the Anglophone militants, stating the destruction of the hospital will “deprive people of urgently needed care and further weaken the local health system.”

“The crisis in the Northwest and Southwest regions of Cameroon has seen a large number of attacks on healthcare, with health workers or patients threatened, abducted, injured, or killed, as well as medical infrastructures damaged or destroyed,” it said in a June 10 statement.

The attack on the hospital came just a week after Cameroon government admitted its soldiers killed nine unarmed civilians—including a 12-month-old baby—on a search mission for a missing comrade in the remote Missong area, another crisis-affected Anglophone region of the country’s Northwest.

“In the middle of the night during the hunt, the [soldiers] ran into a group of … villagers,” said Atongfack Guemo Cyrille Serge, the spokesman of the Cameroonian army in a June 7 press statement.

“Fearing the worst for themselves and their missing comrade the soldiers, in a hasty reaction … and in defiance of the sacrosanct principle of precaution, used their weapons,” Serge said.

He regretted it was an “unfortunate incident,” further reassuring that four soldiers involved in the shooting have been “demobilized … and placed under house arrest.”

A week after the killings, the Anglophone separatists launched a retaliatory attack on a military post in the neighbouring West Region outside the conflict zones, killing at least five soldiers.

Earlier, at least 20 civilians were killed in Southwest Region of the country during an attack believed to have been carried out by Anglophone separatists.

“It is certainly a dark episode of the existing cycle of violence that drives this conflict,” Burton said.

“From Missong to Ngarbuh, Mautu to Muyuka, this retaliatory pattern is critical to understanding the crisis. Unfortunately, it is the civilian population that is caught in the middle, unable to escape a cycle of violence controlled by the men with guns.”

In October 2016, Anglophone lawyer and teacher unions launched peaceful street demonstrations against the obligatory use of French in schools and courts in the country’s two English-speaking Northwest and Southwest regions, which are home to about 5 million of Cameroon’s 27 million people.

Following the suppression of protests, the conflict degenerated into a secessionist armed struggle for the independence of a country called Ambazonia.

The crisis is rooted in Cameroon’s troubled colonial history.

Upon independence in 1960, the country inherited two distinct and uneasily coexisting traditions: one French-oriented and the other British-oriented, each with different systems of education, justice, and governance.

About 2.2 million people in the two English-speaking regions have been affected by the conflict, including some 6,000 people killed and 956,000 internally displaced.

Earlier this month, the Norwegian Refugee Council ranked Cameroon third in the world’s most neglected displacement crises, behind Burkina Faso and South Sudan.

“Growing insecurity and abuses against civilians in the English-speaking regions forced people to flee in search of safety … attacks on teachers, schools, and health facilities continued leaving 700,000 children unable to go to school,” the report stated.

Cameroon has been ranked in the top three on the list for the past four years due to what the humanitarian group terms “a consistent lack of political engagement and international attention.”

The deteriorating security situation in the two Anglophone regions forced the Department of Homeland Security to, on April 15, designate Cameroon for Temporary Protected Status, shielding the estimated 40,000 noncitizen Cameroonians living in the United States from possible deportation.

The U.S. State Department’s 2021 country report for Cameroon painted a grim picture of rights abuses, including extrajudicial killings by security forces and armed Anglophone separatists; forced disappearances by security forces; serious acts of corruption; and unlawful recruitment or use of child soldiers.

“U.S. administrations have kept the Cameroon crisis on a back burner, as they have other similar simmering conflicts,” former U.S. assistant secretary of state for African affairs Tibor Nagy told The Epoch Times in an email.

“It is one of the world’s most neglected conflicts. Not disinterest as much as other crises being deemed of greater urgency and seriousness,” he said.

“Yet, it is not insulating itself from violence and on its watch we have seen a political crisis become what is now a civil war. And the death toll rises every day,” he told The Epoch Times.

Nagy likened the back and forth violence and retaliation over the past several weeks to “Gandi’s wise saying: ‘an eye for an eye makes the whole world blind’.”

“If the separatists want the international community to take their cause seriously, they need to stop wanton violence,” he said.

“For the government, which has already lost credibility by their no-win policy, the best maxim is: when one is digging themselves into a hole, the best thing is to first stop digging.

“Meanwhile it’s the innocent who suffer most—seriously, what gain is there in burning down a hospital?  Those are [Vladimir] Putin’s tactics!”