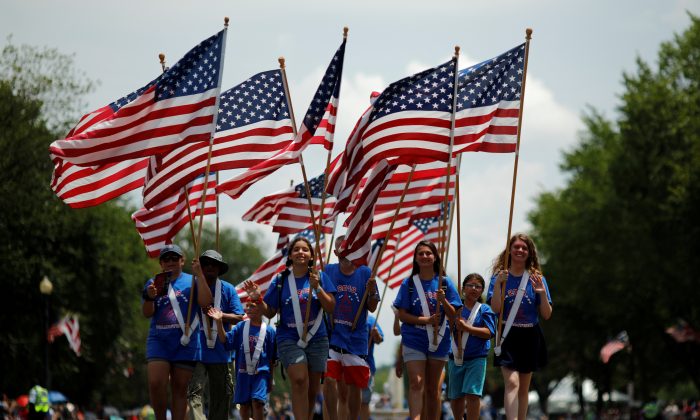 People carry U.S. flags as they take part in a parade during Fourth of July Independence Day celebrations in Washington on July 4, 2019. (Carlos Barria/Reuters)
Viewpoints

Black History and the True Meaning of the American Flag

For several years now, the American flag has been highly debated, as several high-profile leftists started promulgating the idea that it was a symbol of racism because of the fact that the United States had slavery in an earlier stage of its history.

Failed football player-turned-activist Colin Kaepernick forced Nike to pull a Fourth of July-themed pair of sneakers because they featured an American flag. One college professor at Georgetown went so far as to compare the colonial flag (sometimes referred to as the Betsy Ross flag) to the Nazi Swastika and the burning crosses of the KKK.

But what’s the truth? Are the stars and stripes a sign of oppression, or is there a more historically informed perspective?

Supporters of the racist-flag hypothesis will sometimes point to a notable pre-Civil War speech from Frederick Douglass.

“While slavery exists, and the union of these states endures, every American citizen must … behold his cherished national flag pointed at with the utmost scorn and derision,” Douglass said.

They suggest that Douglass believed the flag to be a symbol irreparably tied to the institution of slavery.

However, Douglass’s statement is clearly conditional upon the existence of slavery. During the Civil War, Douglass, in his own words, began “to persuade every colored man able to bear arms to rally around the flag, and help save the country and save the race.” Similarly, after the successful abolition of that wicked institution, he asserted that the flag is “a glorious symbol of civil and religious liberty, leading the world in the race of social science, civilization, and renown.”

This is certainly a different perspective than that of modern leftists today.

Douglass is far from the only black American from that period of the Civil War who came to see the American flag as the preeminent symbol of liberty and freedom. Many of the black soldiers who took up arms to put down the confederacy and secure emancipation also viewed the American flag in a positive light. Those courageous men, many of whom had been slaves at one point in their lives, told a radically different story of the flag than detractors do today.

For example, black veteran and notable historian George Washington Williams rejoiced that “the one flag of a great nation will float as the sovereign symbol of a free and united people.”

Richard Cain said in a speech while he was a member of the U.S. House of Representatives that he and many others had sought to fight in the Civil War to “vindicate the Stars and Stripes.” One black soldier who had fled from South Carolina told his fellow troops that, despite the fact that much oppression had occurred under the American flag, the “first minute” that slave owners thought “that ol’ flag meant freedom for we colored people, they pulled it right down, and run up a rag of their own. But we’ll never desert they ol’ flag, boys, never; we have lived under it … and we’ll die for it now.”

Another black soldier who became a member of Congress, John Roy Lynch, passionately declared: “I love the land that gave me birth; I love the Stars and Stripes. This country is where I intend to live, where I expect to die. To preserve the honor of the national flag and to maintain perpetually the Union of the States hundreds, and I may say thousands, of brave, and true-hearted colored men have fought, bled, and died.”

One of the white officers of the black companies said in his final order that through the courage, bravery, and sacrifice of the black soldiers, “millions of bondsmen have been emancipated. … The flag of our fathers, restored to its rightful significance.”

And this is just a small handful of the stories that I could tell about the true meaning of the flag. No less than seven African Americans, including heroes such as William Carney and Christian Fleetwood, received the Medal of Honor for valiantly defending the flag in battle.

It’s striking that those who suffered the most, sacrificed more, and experienced unimaginable discrimination thought, in the words of one soldier, that the “flag is a big thing.” To them, it certainly wasn’t a racist symbol. Indeed, it was the very symbol of liberty advancing from victory to victory to crush the oppressive enemy. When groups today such as radical BLM chapters call the flag a “symbol of hatred” flown only by racists, they’re ignoring and disparaging the legacy of the black troops during the Civil War who valiantly fought and died to make the United States a “more perfect nation.”

So this Black History Month, let’s remember the true nature of our nation’s past and understand that, although the United States has never been perfect, our country has, nevertheless, expanded the blessing of liberty to a large and more diverse group of people than anywhere else in the history of the world—and of that, we should be proud.