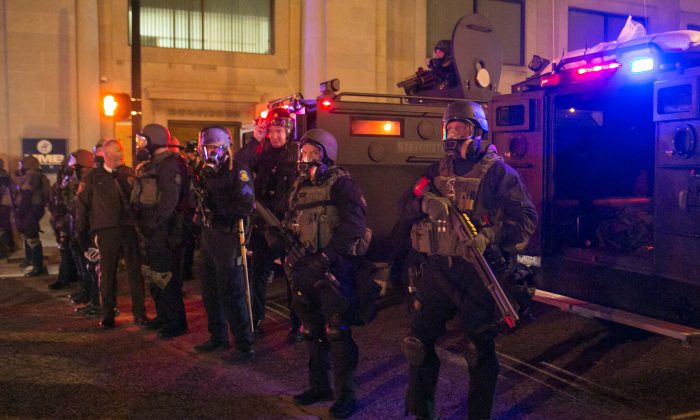 Police in full on riot gear stand by after they fired tear gas at activists not too long before in Ferguson, Mo., on Nov. 25, 2014. (Benjamin Chasteen/Epoch Times)
New York

Carry your firearm at all times on duty & off, carry addtional mags & second weapons. Stay in pairs & be vigilant to people around you.

Police forces have responded by deploying barricades and body armor wearing officers outside of the 79th precinct. The 73rd precinct has also been threatened.

There is some debate whether the man who shot and killed two on-duty NYPD officers in Brooklyn on Saturday December 20, Ismaaiyl Brinsley, was a member of the Black Guerilla Family.

The threats came in the early hours of December 24, while streets were filled with protesters in several regions of NYC. Mayor De Blasio asked protesters to wait until after the memorial service before continuing to exercise their 1st amendment rights, a request that went unheeded by thousands.